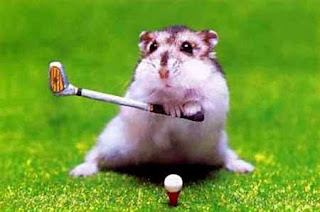 Best parts of golf that make this infuriating game bearable...

1. Hitting your ball into a water hazard, lake, or pond and then having it skip across the water and back into the fairway.

2. When a golf ball careening off a tree and BACK INTO the fairway instead of out of bounds.

3. Chipping into the green from the rough and ricocheting off another player’s ball next to the hole and bouncing in for a birdie/par.

4. Hitting a long drive off the tee further than your playing partners with newer, more expensive, and higher technology drivers than you.

5. Losing a ball in the rough or onto the next course and then finding it again when you come back around to that hole.

6. Seeing one of your playing partners badly hit balls flying at mach speed at your body and being able to duck/dive/bend out of the way like Plastic Man.

7. Getting out of a bad lie in the sand in one shot and getting good distance as well.

8. Finally losing your slice off a drive due to: A. New “Draw” or offset driver or B. Improved swing.

10. Beating your friends in a game and showing off about it.
Posted by Monster of the Week.com at 12:53 PM No comments: 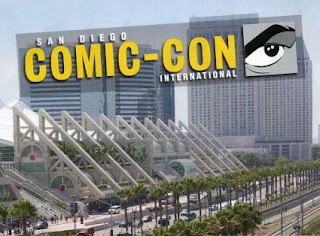 I attended the Sunday, August 29th Comic Con and boy was it packed and I’m sure that is the report you will hear from most attendants.

I originally planned on attending the usually big Saturday event, but just over a week until the show, the Saturday show (and four day passes) was sold out, a first! And then as the week came closer to the Con, both Thursday and Friday sold out as well. I then booked the Sunday show ticket on Friday just in case, and glad I did as Saturday morning came around and Sunday was sold out as well. All four days at Comic Con were officially SOLD OUT, no walk-ins or anything.

After reading reports that Friday & Saturday was busy and packed, I was glad I chose Sunday since I just wanted to see Comic Con one last time since it has become so big, and hour and a half worth of driving, and my friend’s have also stopped going, so this year’s show was suppose to be the last hurrah. I haven’t attended Comic Con in about two years, and I ended up getting to the show about an hour early (9:30 a.m. was when it was stated that the registration doors open and 10 a.m. to the exhibit hall). I parked near the convention center just across the street, but the parking cost was a whopping $20.00 for the day, heck no! I drove a couple blocks and found another parking lot…same thing $20.00. Well I remember last time just paying $10.00 so I kept looking, ended up settling for $12.00 for a stall at an ACE parking structure next to the S.D. Padre’s Petco Park baseball stadium.

Now after attending Anime Expo this year, I was prepared for a long wait, maybe an hour. Well Comic Con is head and shoulders above the crew at AX. I walked into the Con at 9a.m. (30 mins. Before the reg. was suppose to open) and was directed to go upstairs to the registration booths, went up the escalator and proceeded to get my badge from a young lady, all-in-all taking about five minutes to register and get my badge, now that’s class. The AX people need to take a cue from SDCC since they have a larger area, more attendees and still manage to get people in ON TIME! The only problem I experienced at the beginning was lining up in the hallway to the escalators to go into the exhibit hall, waiting for 10 minutes then was directed by staff telling everyone that the line was OUTSIDE. So I had to get in another line and wait, waited 30 mins. until 10 a.m. Read the program guide while waiting, sad that the majority of stars and events happen on Saturday, even the autograph booths are sparse on Sunday.

Finally at 10 a.m. the line started moving, once inside I tried to look for the Hasbro Toy Shop booth so I could get my limited edition Transformers Alternator Rodimus and Titanium Menasor. The Con is huge for those who’ve never attended (almost ½-3/4 mile long I think end to end with tons of booths lining back-to-back of each other) so I had to circle back to get to the Hasbro booth. Ended up waiting in line again, about 20-30 minutes. Once I got to the front of the line, it was announced that the Menasor was sold out, so they didn’t even have enough for Sunday which I think is ridiculous. Got the TF Rodimus though. Lucky though they did inform us that the next day the items would be available online, so I was able to order the Menasor today, plus shipping & tax of course, dang you Hasbro!

Now that I had Rodimus, my next thing to do was get some original sketches from the artist’s alley. My main reason to go to SDCC was to get original drawings from comic pros, I’ve only done it a few times before and all for about $20 for some water color drawings. I saw the Green Lantern DC artist there, but sketches was $150, another was $150 as well, Adam Hughes was charging $250. Even a basic baseball card size head sketch by some was $20. Now I thought those were a bit high so I passed since I have a artist who I’ve commissioned work from before doing big 11x17 drawings for less than half those prices. So I was disappointed in that aspect.

So now it was time to WALK THE CON.

I’ve only attended Comic Con on a Sunday about 2 yrs. ago and that day was sparse of visitors, this year was packed, almost a Saturday traffic in my eyes. It was bumper to bumper traffic, pushing and squeezing through the narrow aisles and booths. I overheard attendants from Saturday say that that day was even more packed, which I could hardly believe since I don’t know how people could even squeeze through. For Con attendees, please don’t take your babies and young children to the Con if they require a stroller! I thought the strollers was banned before, but those with them were trying to squeeze in areas where they didn’t have room causing people to hurdle or push to one side. I feel bad for those in wheel chairs since there was a good amount of them there, and there was just no room. I had a game plan to zig zag through the booths in order to see them, but the traffic was too large that I just visited the booths that I could maneuver to without getting crushed. For a comic book convention, only about 15-20% of the booths I saw had comic books, most of the booths were media related (Star Wars, Pirates, Sci Fi channel, Hasbro, Mattel, etc.).

It took me a full 5.5 hours to see the whole convention center (compared to just an hour at Anime Expo for size and traffic comparison) and I didn’t even get to see any panels or go upstairs to the autograph area. None of the items were really out of the normal I haven’t seen before, swords, Transformers, Manga, DVDs, Dr. Who items, independent comic booths, etc. I didn’t even see rare TF Titanium toys (The Fallen, Ultra Magnus, etc.) that I never saw at retail. On the anime cel side, slim pickings this year. Only saw about 4-5 small booths with cels. The biggest was the Eaton Gallery from Sherman Oaks, CA where I got a couple Super Friends dougas, but they specialize in mostly American cels (Warner Bros, Hanna Barbera, Disney). Was able to get a free sketch of the Atom from the SF show since instead of a price on the label it said “Free- Just Ask” and so as I was paying for the WW sketch the guy looked at the “Free” listing and asked another co-worker since they never saw it before, but they gave it to me free (another similar sketch was $5). I liked the cels they had from the 90s Iron Man (plain cels around $30) and sketches from the new Teen Titans and Justice League shows, but they were going for a minimum of $750-$1k. My only cel purchase was a cel of the enemy look-alike Guyver Aptom from the Lost Numbers Zoanoid team with sketch.

Kept staring at the watch since on Sunday the Con closes at 5 p.m. instead of the normal 7 p.m. I was nearly done with the booths at 4:30 a.m. but wanted to circle in on some items to pick up. I really wanted to get the huge, oversized Smallville bags that was the size of a person that everyone was carrying around, but I couldn’t find the booth. Also tried to get a “Vote for Petrelli” campaign button from the Heroes booth but it was packed since they did raffles throughout the day. Decided to leave around 4:30 a.m. an hour and a half before closing to escape the traffic out of San Diego. So ends my day at SDCC 2007 and to my Con experience in SD for the foreseeable future.

Score: 3 out of 5. Still fun but getting less exciting due to the large crowds and high cost of items.

Posted by Monster of the Week.com at 12:40 PM No comments: