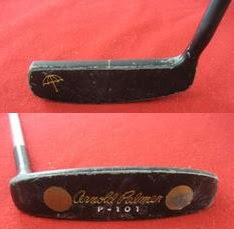 After getting into golf there are things you start to notice that differs it from other games, mostly how equipment changes on an almost monthly basis and trying to not get addicted and spending money out the wazoo. I’ve done counts before and I was really into buying new clubs once in a while. I t wasn’t uncommon to get a new driver every few months or try out new putters or even get multiple golf bags. After moving and consolidating all my gadgets, I decided to dwindle the equipment and use the money to pay greens fees.

I purchased a Never Compromise GM2 Exchange 3 putter a few years back that just sat in my back-up bag and ended up selling it. I went to a local thrift shop last summer and came across some old putters and saw one in a ratty condition but had good potential. I was previously using a Taylor Made Monza Roza mallet putter and wanted to try a blade more regularly. I purchased the Arnold Palmer P-101 putter and took it home to clean off the well-used putter. With the nicks on the head I ended up using some filler paint to cover the blemishes and was able to soap and clean off the original Golf Pride grips that was still in remarkable condition.

Comments: The Arnold Palmer P-101 blade putter has a classic look to it, stands out with a black-colored head with the trademark Arnold Palmer umbrella logo on the far left of the face. It’s heel-toe weighted and the neck is a nice flowing non-plumbers neck flange. I believe the one I have is 33”-34”. The feel is a bit above average and allows for goof swing speed management with a good overall weight to it. Off-hits do result in shorter length, due to the age (I don’t know how old), it’s not one of the recent putters touting high MOI.


It sure is s beauty with its simple and elegant look that I’ve had other golfers comment on the putter’s look that I haven’t had with others. If you like classic blade putters that you don’t often see (*Scotty Camerons* cough), check your local used bins for this club. 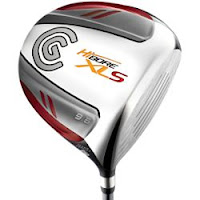 Comments: After selling my last MacTec NVG2 driver (see last equipment review), I decided to go back to the HiBore line from Cleveland after keeping the original version in my bag for close to a year (longest driver in use!), so I ended up with the 2008 Cleveland HiBore XLS version.

I previously tried the driver at a demo day and got good distance and low flight at the time. There was a sale at the local Dick’s Sporting Goods and couldn’t pass up the chance to get another 10.5 degree HiBore with an upgraded aftermarket shaft. Dick’s had for the same price as the stock Cleveland Fujikura Gold, either (in Regular flex) Aldila NV or Graffaloy ProLaunch Blue. I previously had an Aldila NV on my TaylorMade r7460 Draw driver and decided to try the ProLaunch Blue since the shaft seem a bit stiffer since I was looking for a lower launching ball flight.

The one thing I missed from the original HiBore that the XLS didn’t was the great metallic crisp sound off the face. The XLS had a deeper, more hollow sound to it. The sound isn’t as bellowing and muffled as the MacTec NVG2, but doesn’t have the “wow” factor as the original sound. The head is a huge 460cc and the deep scoop and alignment aid is nice. Red/silver graphics on the sole are nice as well.

For performance issues, the XLS is a good follow-up that has finally gotten me to consistently go 235+ yards on hits with some pure hits going up to 245-259 yards. Sweet spot is definitely larger and provides forgiveness that I needed. I routinely hit off center and shots still give considerable distance.

Haven’t been able to compare the XLS to the XLS Monster or the previous XL so I can’t compare the leap from the all-black XL or the huge Monster head.

The Cleveland XLS is recommended for those looking for a good amount of forgiveness and require a sweet spot for off-center hitters. Check your local stores for good prices with upgraded shafts that you may be able to get for around $130.

Its been a while since I’ve done a golf equipment review, so for the new 2010 year I will try harder to give all you budget minded golfers my personal reviews on value-priced equipment that I’ve personally tried. So here’s the first golf review of the decade!

Comments: Recently replaced a few months back my previous MacGregor MacTec NVG2 10.5 degree driver. While I really like my MacGregor NVG2 3-wood, the driver just didn’t have the pop or additional distance I was hoping for.

The MacTec NVG2 3 wood is a blast to hit, crisp metallic sound, thin face for hitting off the deck and provided me a good 210-225 yards off the tee. I was hoping for the same magic when I got the driver and the honeymoon did not last long. The NVG2 driver afforded me approximately about 5-10 additional yards only when I hit the face on the sweet spot. If I mis-hit the shot (which I almost always do), then the carry would just be the same as the 3-wood. The sound of the hit was also totally different than the fairway wood, while the 3-wood had a nice high metallic sound, the driver had a low, almost tinny sound to it. The best sound I’ve had from a driver was the first generation Cleveland HiBore with the smashing metallic sound that made even my bad drives sound like pure zingers. The MacTec NVG2 driver lacked the sound and performance overall.

For those looking for traditional looks, the NVG2 line was not for you. It had an almost all chorme-like silver exterior with rivot-looking weights on the sole. The Fujikura shaft was a Regular flex for me and did an ok performance. Grip though was a minus, MacGregor used a corded grip, which for oft-tight grippers like me would cause blisters. As mentioned, the sweet spot on the face was small compared to other 440cc faces I’ve tried, causing hooks/draws when not properly hit, odd for a game improvement driver to not have such forgiveness.

The headcover had a nice black look with a zipper so a player didn’t have to struggle pulling the cover over. While I’ve read others say the zipper scratched the gofl shaft, that didn’t happen to me.

If you would like to try out this driver, you should be able to find a good price for it as it was not a hot seller. Since the performance wasn’t for me, I do recommend the looks of it, I’m into the modern look and its mechanical silver exterior looks like a space ship on its way to knock your golf ball into outer space.