Long Beach, CA (September 2, 2015) – In advance of the seventh annual Long Beach Comic Con, MAD Event Management announced today highlights from its guest list, the full slate of programming for the convention and several major initiatives. All told, the convention will play host to more than 175 guests, 100 panels, and 300 artist alley exhibitors and more than 475 exhibitors. The convention will be held September 12th and 13th in the main exhibition hall at the Long Beach Comic Convention Center.


This year’s Long Beach Comic Con guest list is amazingly diverse with over 175 guests, including:


New initiatives and exclusives include:


Girl Scouts of Greater Los Angeles
Due to generous donations and grants, 200 greater Los Angeles girls—including 100 girls from underserved communities—will take part in a program that includes meeting comic professionals, playing laser tag and attending a workshop where they can earn their Comic Book Artist and Novelist badges. This year actress Chloe Bennet, who plays Skye on MARVEL’S AGENTS OF SHIELD, will be presenting the girls with their Comic Artist badges.


“At the Long Beach Comic Con, middle school and high school Girl Scouts will be able to work one-on-one with professional comic book artists, writers, editors, and young adult novelists to create a comic book page from start to finish,” said Lise L. Luttgens, Girl Scouts of Greater Los Angeles’ Chief Executive Officer. “Girl Scouts is all about giving girls access to hands-on experiences that empower them to discover and pursue their passions, and this unique collaboration with the Long Beach Comic Con is a perfect example of that.”


Exhibitor Golden Apple Comics will sell a Long Beach Comic Con exclusive edition of STAR WARS: SHATTERED EMPIRE issue 1 with a cover by artist Phil Noto. The comic is an exclusive available through Golden Apple and GameFly. Golden Apple will be exhibiting at LBCC at booth # 1024.


The Hero Initiative, a charity dedicated to helping comic book creators in financial need, has partnered with Los Angeles brewery MacLeod Ale for a limited-edition label for The King’s Taxes Scottish Ale, designed by GHOST RIDER and CARNAGE artist Clayton Crain. The art will appear on a limited run of bottles, signed prints and commemorative glasses. Hero Initiative will host a special tasting from 6 PM to 9 PM Saturday, and have a full selection of The King’s Taxes merchandise available.

CoastCardsAndCollectibles.com will host a Magic the Gathering tournament, which will include on-demand Origins Drafts and Standard Constructed as well as running Standard Constructed and Modern Main Events.  Kids(12 and under) will also have exclusive Pokemon and MtG events on both days!"


The Columbia Memorial Space Center is partnering with Long Beach Comic Con for Space Expo 2015, an innovative and one-of-a-kind program that will connect comic book convention attendees directly with the world of scientific discovery. Panels will be held featuring top aerospace industry notables discussing hot button scientific topics and there will be interactive exhibits featuring robotics, 3D printing, and even a spacesuit – all curated by Columbia Memorial Space Center, the prestigious CA-based learning center dedicated to bringing the wonder and excitement of science to audiences of all ages and backgrounds.


“The Space Expo is an innovative way to connect the public to space and science,” said Columbia Memorial Space Center President Ben Dickow. “Instead of making people come to us, we're taking science and technology to them with two full days of activities and speakers who are at the top of the space field. The Expo will give the public the opportunity to interact directly with NASA professionals and space explorers. We've put together the largest collection of JPL scientists we know of, outside of an academic conference, all ready to share their love of space with you!”


Enjoy an exciting weekend full of exceptional guests and exhibitors, and engaging panels, at Long Beach Comic Con, Saturday, September 12 from 10:00 am - 7:00 pm and Sunday, September 13 from 10:00 am - 5:00 pm at the Long Beach Convention Center. The show opens to advance ticket holders both days at 9:30 AM. Tickets are available now through the website: www.longbeachcomiccon.com.

Posted by Monster of the Week.com at 8:25 PM No comments: 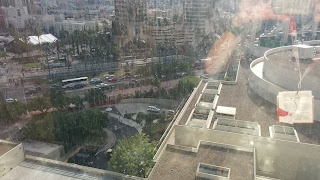 Other events and stuff! With Star Wars and its new film around the corner there was a big sneak preview with an orchestra with the main actors from the film hosted behind the convention center. We were luckily, though surprised, to learn the event since we had a view of the fireworks from our hotel room and only found out it was Star Wars related the next day. 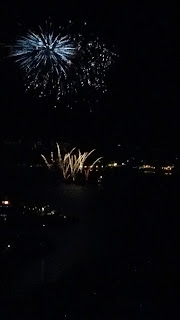 There was also a Nintendo exhibition event at the hotel where attendees can play games and win prizes. 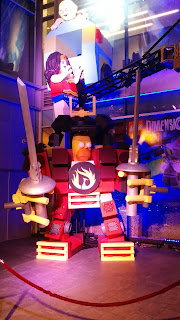 The big outside event this year was talk show host Conan O’Brian hosting his show at the downtown San Diego theater. Guests of his included Game of Thrones, Walking Dead and more. 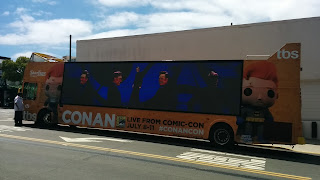 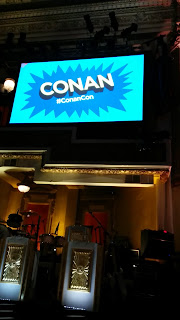 Right outside the convention center was also an Assassins Creed outdoor obstacle course (ala American Ninja Warrior) and a barbershop onsite! There was a Heroes tv outdoor set experience and small events sprinkled throughout the Gas lamp District as well. 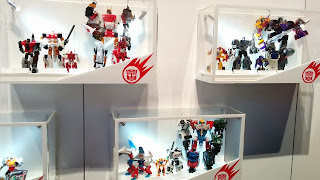 Posted by Monster of the Week.com at 3:29 PM No comments: