September 27, 2018) Humanoids, the publisher of some of the world’s most iconic and groundbreaking science fiction and fantasy graphic novels, has named Eisner award-winning artist John Cassaday as the company’s first ever Chief Creative Officer. Internationally renowned for publishing seminal genre works by creators from all around the world, including The Incal by Alejandro Jodorowsky and Mœbius, Humanoids has been aggressively ramping up its publishing slate. Earlier this year, Humanoids debuted Life Drawn, a new imprint of literary graphic novels that spotlights slice of life stories, biographies and stories with social political themes. In naming Cassaday its Chief Creative Officer, the Los Angeles-based publisher continues its expansion while maintaining their high quality standards.


“John Cassaday is one of the seminal artists of the comic book industry,” said Humanoids CEO and Publisher, Fabrice Giger. “John co-created I AM LEGION for Humanoids in 2004 and became part of the Humanoids family. From now on, he will play a major role in Humanoids’ original content development that will have the industry talking.”


The announcement of Cassaday as Humanoids’ Chief Creative Officer comes in the lead up to New York Comic Con, where the publisher will announce a major publishing initiative during the Humanoids 20th Anniversary In America panel on Friday, October 5 from 1:30-2:30 PM in room 1A02 of the Javits Center.

Humanoids 20th Anniversary In America
Join Chief Creative Officer John Cassaday, Senior Editor Fabrice Sapolsky and Director of Sales and Marketing Jud Meyers for the panel that will change the way you see Humanoids forever!
Almost a dozen A-List comic creators will be in the room answering questions and celebrating 20 years in the U.S. Humanoids is about to make history again as it did in the past with legendary creators such as Moebius, Jodorowsky, Ladronn and Manara. It’s THE panel you don’t want to miss. New Projects! New Heroes! Hot creators! A bold new direction ushering in a new era in comics. Panel followed by Q&A session. Surprise collector give away for the audience!


“This is the first time I’ve taken on an executive role at a company,” said Cassaday. “And that speaks to just how excited I am to be a part of a bold new chapter in their history. Fans who attend the New York Comic Con panel will be a part of it on day one.”

A preview of HIGH HEAVEN, the new comic book magazine from AHOY Comics

Chronic malcontent David Weathers dies and goes to Heaven—where everything is terrible, and everybody hates a complainer. HIGH HEAVEN is a savage satire by writer Tom Peyer (Hourman, Batman ’66) with art by Greg Scott (Black Hood, X-Files), colored by Andy Troy.


“More of a magazine than a comic book, High Heaven #1 offers a full comic story by Tom Peyer and Greg Scott, a cartoon from renowned American cartoonist Shannon Wheeler, a short comic by Tom Peyer and Chris Giarrusso as well as a prose story from famed Scottish comics writer Grant Morrison… What’s great about this issue is that after the 24 page story there’s still another half of the issue left. AHOY delivers content. The issue is worth picking up for the main story alone, but each extra adds tremendously.. Fantastic.” — ADVENTURES IN POOR TASTE


“Delivered with that Tom Peyer panache and his sneaky habit of undercutting reader expectations at every turn. And gorgeous art by Greg Scott, giving it all personality and (seedy) visuals. I’m hooked.”―Kurt Busiek


“A well rounded book with strips that will make you think as well as make you laugh.” — COMICON


“A very biting take on the concept of eternal happiness.” — OMNI COMICS


“HIGH HEAVEN has a great premise. I loved it and can’t wait to see where it goes next. Also: the Hashtag: Danger back-up was a riot. Chris Giarrusso is just the best!”―John Layman


“Tom Peyer and Chris Giarrusso present Hashtag: Danger a fun ode to cartoony sci-fi adventure comics from newspapers, with a mature and modern twist.” — EVERYTHING ACTION

“As gorgeous as it is absurd.”―Alisa Kwitney
Posted by Monster of the Week.com at 9:30 AM No comments: 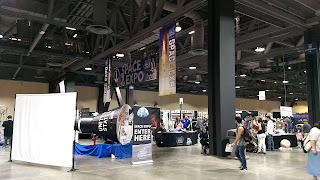 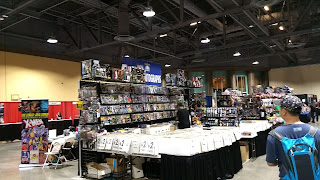 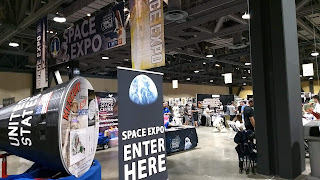 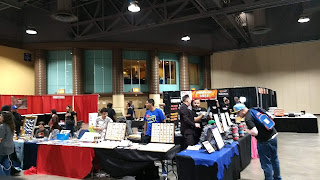 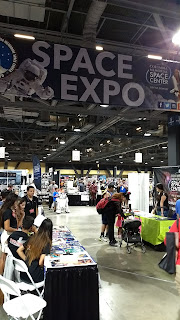 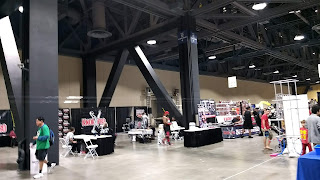 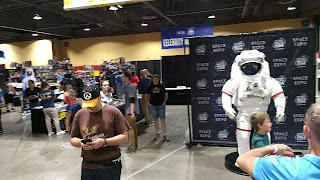 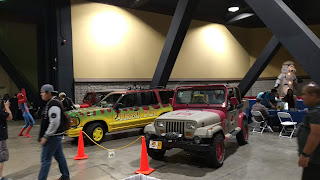 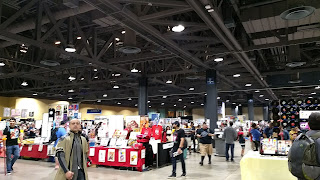 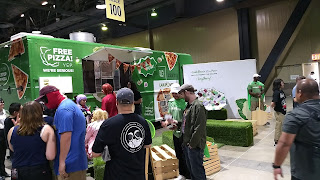 Food truck inside the event! 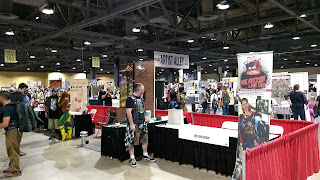 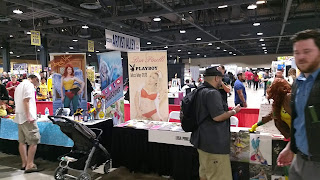 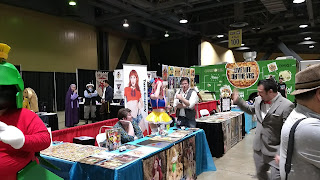 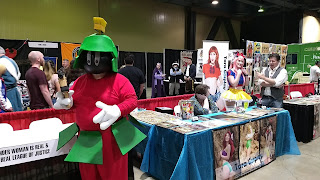 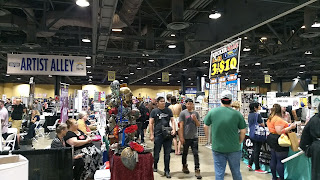 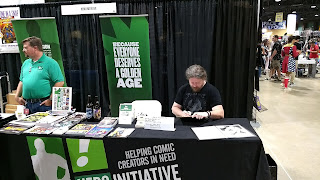 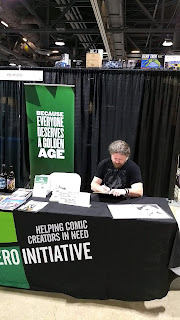 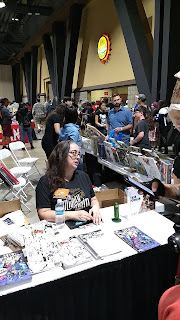 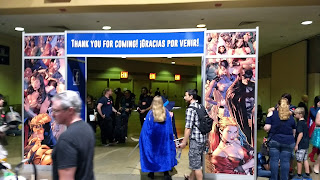 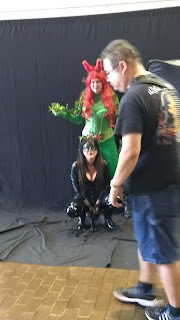 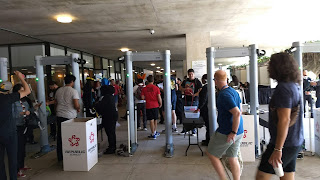 Security check prior to entry

Posted by Monster of the Week.com at 7:30 AM No comments:

Posted by Monster of the Week.com at 11:00 AM No comments:

September 18,  2018) There’s no band in the world like BABYMETAL, whose hit songs like “Distortion,” “KARATE,” and “Gimme Chocolate!!,” have captured the imaginations of fans around the globe. This fall, BABYMETAL will venture into the publishing world with the original graphic novel APOCRYPHA: THE LEGEND OF BABYMETAL, which explores the unknown mythology of the band. In advance of New York Comic Con, Amuse Group USA - a subsidiary of BABYMETAL’s powerhouse management company Amuse, Inc. - and Z2 Comics are announcing a Deluxe Edition of the eagerly anticipated graphic novel, which will be released in a collectible 10x16 Clamshell Box, include 3 original prints, and will be signed and sketched by illustrator GMB Chomichuk. APOCRYPHA: THE LEGEND OF BABYMETAL Deluxe Edition is limited to 500 copies and will retail for $199.99, with shipping available worldwide, and will be available exclusively at https://www.z2comics.com.

In the story, a mission from the Fox God– an entity frequently highlighted in BABYMETAL’s music and performances – takes three reincarnating protagonists on a time-traveling journey from prehistoric Kyoto to modern day New York City. Now available for preorder online via Amazon, ASMART, Barnes & Noble, and Books-A-Million, the standard edition of the book will be in comic book stores and bookstores on October 30, 2018 and retail for $24.99.

For more updates, follow the graphic novel on Twitter and Instagram and follow BABYMETAL on Twitter,  Facebook, YouTube, Google+, and Instagram.
ABOUT BABYMETAL: Formed in 2010 in Japan, BABYMETAL is a metal dance unit. Their combination of powerful metal sound and dance performances, propelled their first  studio album BABYMETAL onto the US Billboard charts. With their second album METAL RESISTANCE, they became the highest-charting Japanese band ever on UK’s Official Albums Chart, landing at number fifteen on the charts, and reaching the 39thspot on its debut on the U.S. Billboard, becoming the first album by a Japanese artist to break into the chart’s top 40 in more than 50 years.

BABYMETAL has performed with some of the most influential musicians in the world, having supported Lady Gaga on her ArtRave: The Artpop Ball Tour, opened for both the Red Hot Chili Peppers and Guns ‘N Roses, and performed as special guest for Metallica. They performed at the prestigious Wembley Arena in the UK, becoming the first Japanese artist to ever headline at the venue.

In summer 2017, BABYMETAL held a domestic tour 5 FOX FESTIVALS in JAPAN and BIG FOX FESTIVAL in JAPAN. In December 2017, BABYMETAL held a very special two-day concert in Hiroshima, SU-METAL’s hometown, to celebrate her “coming of age” at the Hiroshima Green Arena. In the same year, BABYMETAL was crowned “MTV EMA’s BEST JAPAN ACT” in which the group became the ultimate winner out of 32 countries and also became first Japanese act to be given such an award.

ABOUT APOCRYPHA: THE LEGEND OF BABYMETAL
Discover the myth of the worldwide music sensation BABYMETAL. Tasked with defeating the forces of darkness and division, the metal spirits must travel through a variety of eras of time, assuming different forms and identities. What we are seeing is not the BABYMETAL of the present. It's the original story based on BABYMETAL you've never heard before. The long-hidden metal spirit’s apocrypha of the METAL RESISTANCE will emerge.
Posted by Monster of the Week.com at 1:18 PM No comments: