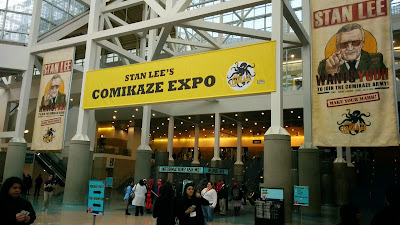 The fourth annual Stan Lee's Comikaze Expo held at the Los Angeles Convention Center has just passed and it continues to get bigger and smoother as the years move on. Held on the busy week of Halloween weekend on Oct. 31st through Nov. 1st, it is So. California's only third 3-day comic convention, just trailing the SDCC-backed Wonder Con in Anaheim as well as the ubiquitous San Diego Comic Con. 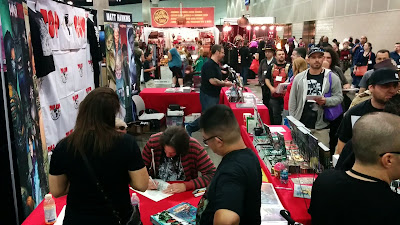 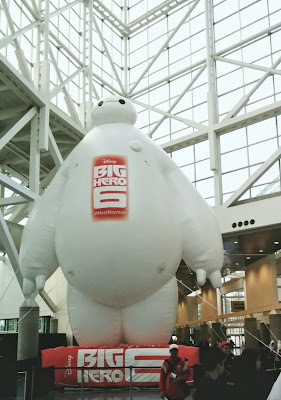 Clearing up previous admission issues, the ticket buying booths, press booths, general admission lines have been spread out and having the ability to pick up tickets the Thursday before the convention started helped previous crowd-line traffic to a minimum. Arriving just an hour before the start of the convention there were minimal lines at pick-up and the ability to wait in line at the main hall or the front doors helped alleviate crowd standing issues from the past. 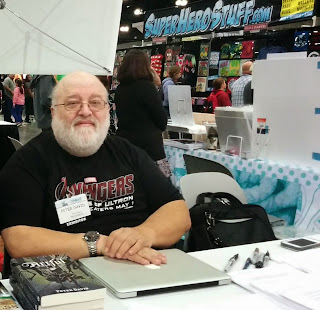 Big banners hanging from the ceiling also helped direct traffic to specific aisles that attendees were looking for. The lines within the show were especially long for hot artists such as J. Scott Campbell, Jim Lee and John Romita Jr., with 1-2 hour line waits not unexpected. Having their lines at the back of the convention center helped with not blocking aisle space for vendors, but when the lines started stretching longer and longer, having additional volunteers to keep crowds from veering off and getting unwieldy which happened at the Romita Saturday signing.

The comic publishers attending the show included Aspen Comics, Top Cow, Boom Studios and Nickelodeon. The Hot Topic booth had an adequate line for their exclusive items as well as a spin-the-wheel promotion where you can win fun items such as a Stan Lee Garbage Pail kid sticker card. 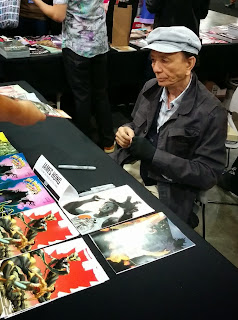 Guests writers and artists such as Peter David, Agnes Garbowska, Joe Jusko, Livio Ramiodelli, eBas, Joel Gomez, Joe Benitez and others kept the comic crowd event in check. Portions of the show floor had arcade games to play as well as set-ups and displays of comic art, movie/tv costumes and a main stage where guest were interviewed throughout the day. 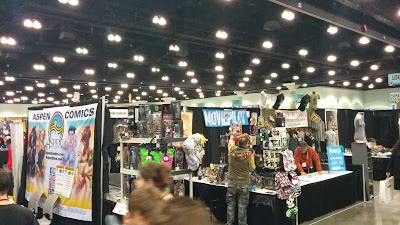 Overall the Comikaze 2014 event was a big hit, with easy ticketing, wide floor space, actual comic guest and a fun crowd and atmosphere. Looking forward to an even bigger and star-studded 2015 event. 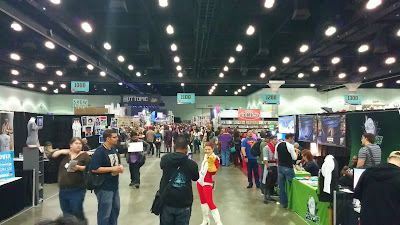 Posted by Monster of the Week.com at 10:10 AM No comments:

Well another Long Beach Comic Con has come and gone. This past Sept. 27th and 28th, 2014 was the most recent iteration of the successful comic convention event which continually draws top-tier comic talent and focuses mainly on comic book and artist/writer related material.

The crowd was evident with the lines on Saturday waiting to get into the event, with pre-registered attendants getting in an hour earlier than same-day ticket purchasers.

The artist alley was smack dab in the middle like a true comic convention should be, with multiple rows of noted professional talent such as Dustin Nguyen (Batman), Joshua Hale Fialkov (The Bunker) along with a mix of amateur and up and coming creators such as Babs Tarr, artist on the upcoming Batgirl series.

The CW Series "The Flash" also had a trailer from the show appearing where attendees could test their speed. Along the back of the hall was a laser tag area, Lego playing area for the kids as well as a Chevy dealer sign-up booth.

A large area covered the convention comprised of actual comic book dealers such as Pulp Fiction, Jay Company Comics, Comics Wise, Phat Collectibles, along with a myriad of toy sellers and independent booths.

The Sunday event was slight in traffic compared to Saturday in the a.m., but parking under the convention was already full by the opening time and foot traffic was steady throughout the day on both days.

Lines for creators was small or non-existent compared to larger conventions such as the recent San Diego Comic con or the close-by Wonder Con in Anaheim. The only booths that had significant long wait times included the Allreds and Amanda Conner/Jimmy Palmiotti booths which had stretches of fans waiting for their signatures. Word to the wise to LBCC staff, please separate out your top talent guests so they are not back-to-back to each other since the lines begin to merge and other booths/guest artists get drowned out by the fans of the other creators.

Overall the event was enjoyable and very stress-free compared to San Diego Comic Con and even the ever-growing popularity of Wonder Con-Anaheim. Heres hoping for the LBCC staff in bringing in more top-tier comic talent that does not routinely attend Southern California conventions to appear at this nice local and friendly convention.

Posted by Monster of the Week.com at 9:58 AM No comments:

WonderCon 2014 has passed, now referred to as WonderCon-Anaheim as WonderCon-San Francisco should be back in effect one day according to the WonderCon program book. So it looks like the success and packed 2013/2014 season has led to Orange County now getting their very own San Diego Comic Con-lite convention as an annual event instead of just a hold-over until Comic Con Intl. was able to secure a location in San Francisco again.

Compared to the 2013 WonderCon in the same Anaheim Convention Center location, this year it was able to secure halls A & B as well as the arena for larger events which was nice but also meant that this year they had a lot more attendees and traffic compared to last year.

Last year had some artist and creators that appeared from multiple national locations but were noticeably absent this year with a good portion of artists and creators being more LA/OC/San Diego locals that usually show up for the smaller regional events. Marvel Entertainment also was absent with nary a booth set-up this year compared to last year leading DC Comics and IDW, Aspen as having the larger booths for comic publishers.

Navigating the aisles was a lot harder this year with a good amount of people on Saturday and Sunday and clogging up the aisles especially in Hall B where the comic book booths were at.

Many artists in artists alley were busy and jammed if you were a B or A-lister!

See you next year WonderCon. 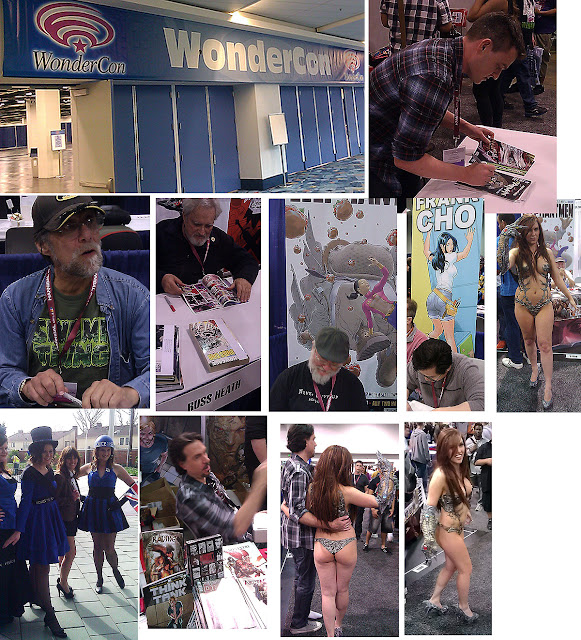 Enjoy!
Posted by Monster of the Week.com at 7:00 PM No comments:

The Dark Knight and the Man of Steel are close friends in the modern day--but the two weren't always such close allies.

Discover how two of the World's Finest Super Heroes met for the first time in the New 52, and the mysterious adventure that takes them to a whole new world-the world of Earth 2! The heroes of the main DC Universe meet their Earth 2 counterparts for the first time!

Wow, the art from the previews and Jae Lee’s previous work continues to captivate and doesn't disappoint. Unfortunately the story that that art coincides with was not as impressive and felt more like a staging event for Lee to captivate the audience with lyrical art-poetry.

The villain of the initial arc I just could’ve grasp what the purpose of the plot to mingle two different earth versions of Batman, Superman, Wonder Woman, Lois Lane. The initial meeting and boyhoods of the Kent and Wayne kids were fun to read, but the meat of the story focusing on the battles between the adult heroes and the hidden villain were a mere afterthought.

The remaining Darkseid arc at the end of the collection was also a hodgepodge of Ben Oliver’s art that just didn't feel up to the standards of Jae Lee and the story as well jumping directly to a New God just did not mash up very well.

The art is amazing and recommended to view, just as cool as Jae’s Ozymidas Watchmen run. The plot though leave much to be desired and felt too drawn out and captivating.

3 out of 5 MONSTERS
Posted by Monster of the Week.com at 4:01 PM No comments:

Black Canary. Zatanna Zatara. Two of the DC Universe's brightest stars join forces to combat a deadly new threat - a chilling, supernatural foe that preys on their weaknesses and unleashes their awesome powers against each other!

A year ago, Black Canary infiltrated a gang of female criminals set to pull a dangerous heist at a Las Vegas casino and now the story can be told!

With an almost Darwyn Cooke/J. Bone-style artwork, Joe Quinones pulls off along with author Paul Dini (BATMAN: TAS, Streets of Gotham) a fun gal-duo standalone story that showcases the very first meeting of these Justice Leaguers as well as a Vegas team-up.

The story has the standard, casino heist gone wrong plot; the art by Quinones pushes the novel along with some uncanny facial portrayals of the characters that are also reminiscent of Amanda Conner’s lively work.

This team-up is a fresh breeze since it pits Black Canary and Zatanna in their pre-New 52 identities and gives the story a more fun, light-hearted approach that should captivate a wide range of audiences tired of all the current doom and gloom.

4 out of 5 MONSTERS
Posted by Monster of the Week.com at 1:52 PM No comments:

Having played out every trick on the fine citizens of Gotham City, Harley Quinn - the Joker's former girlfriend - decides that another city deserves her attention.

After all, why menace one city when you can menace two? Especially if the second has a Man of Steel guarding it. Harley high tails it to Metropolis, with ally Poison Ivy.

This was a very fun Harley book with her personality still very much BTAS/Dini-inspired instead of the crazy Suicide Squad/New52 version.

The art by Terry Dodson in the majority of the issues stands out with very vibrant and sexy style, while the latter half by Craig Rousseau, while serviceable is just not as lively or attractive that a Harley/Ivy combo book needed to be.

Kesel stands out by going ahead and having fun with the book with Harley taking on a new personality to infiltrate the Daily Planet and mingle with the likes of Jimmy Olson while still vamping it up around as Harley and chasing around town with Poison Ivy her pal.

4 out of 5 MONSTERS
Posted by Monster of the Week.com at 3:45 PM No comments: