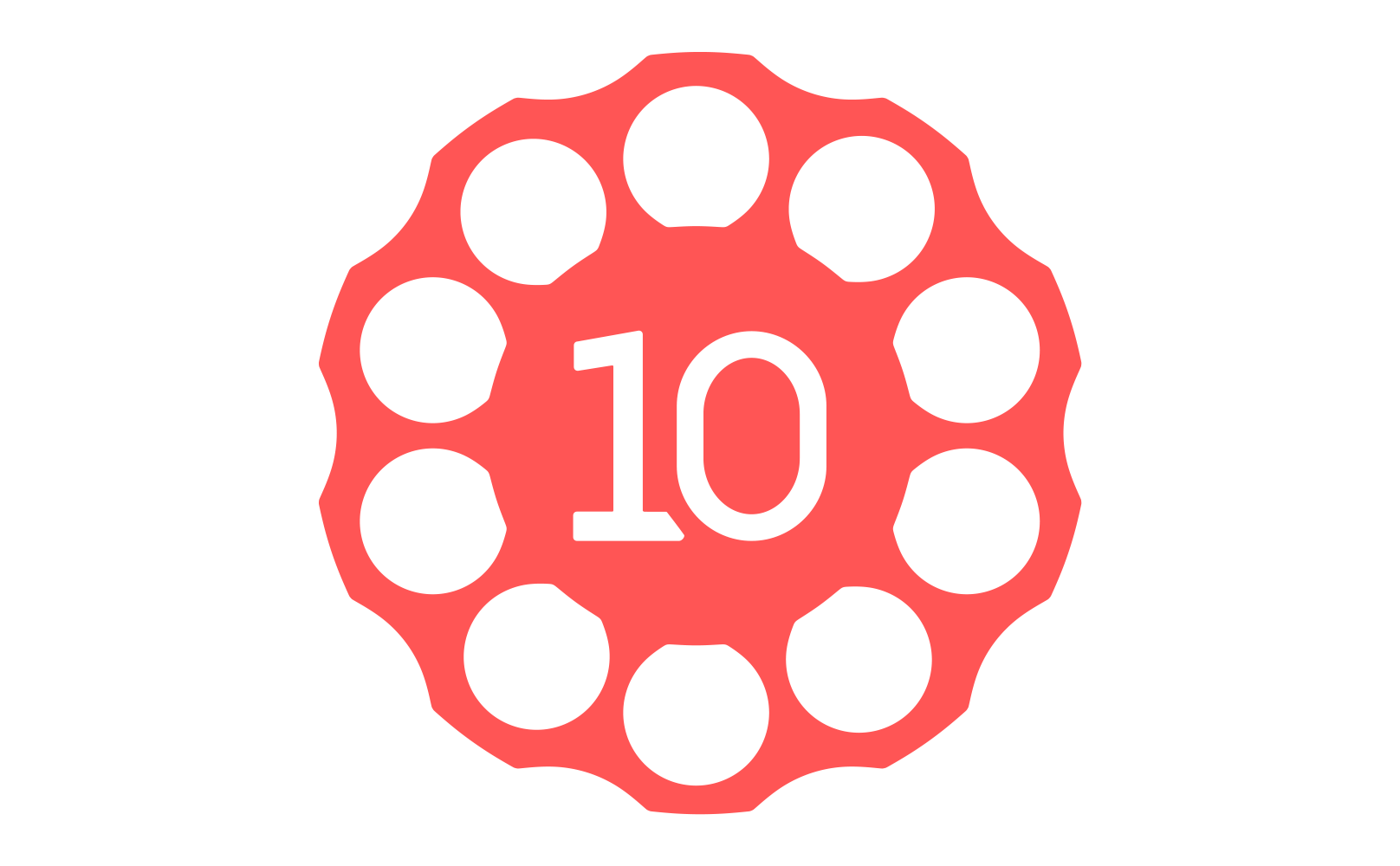 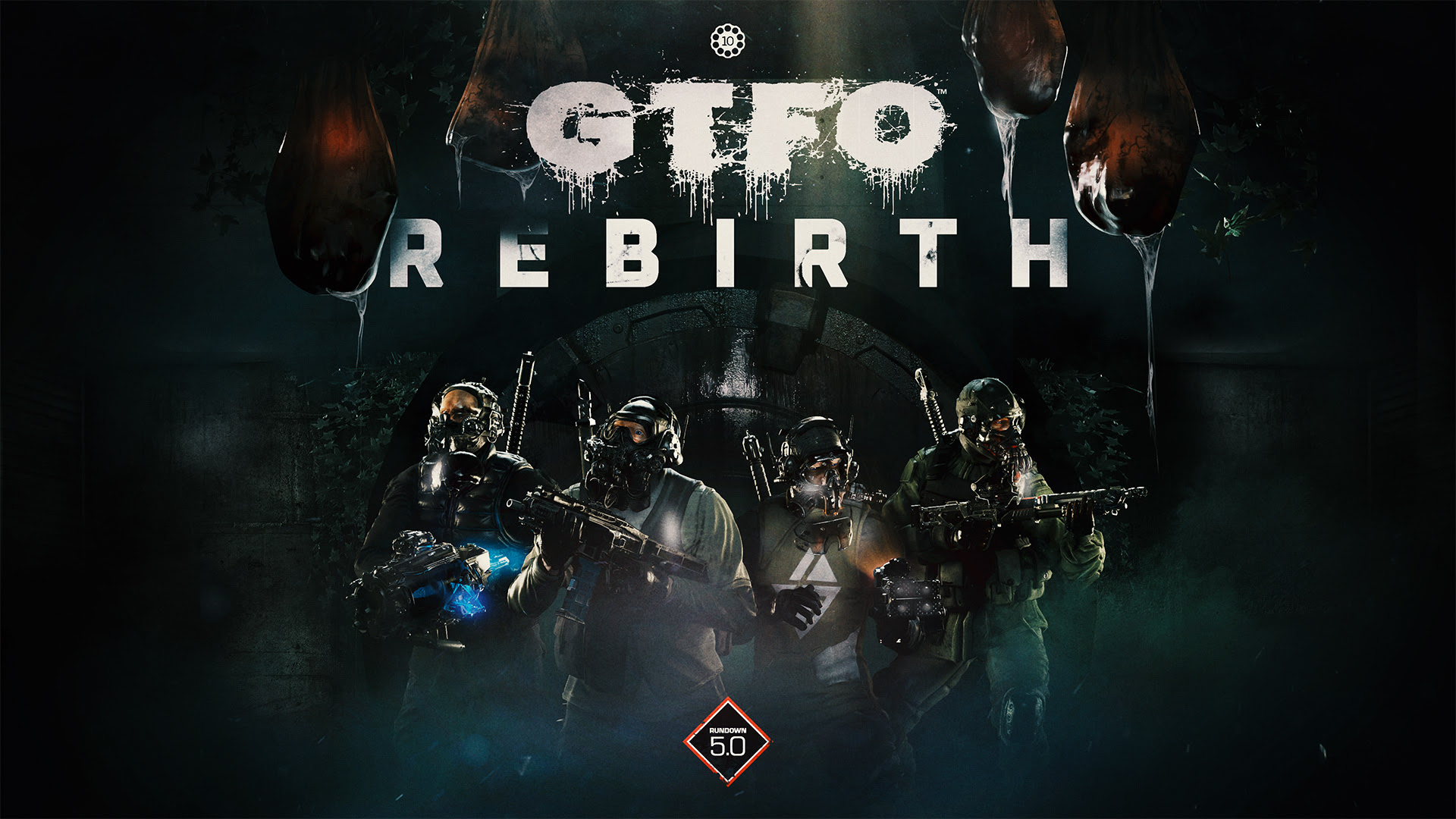 Described as “Left 4 Dead meets Aliens,” GTFO is a terrifying, hardcore cooperative multiplayer shooter where good teamwork means the difference between life and death. The game uses a concept called Rundowns, which are regular game updates that add new limited-time expeditions (maps, scenarios, enemies, etc.) that completely replace the previous Rundown. Cast in a four-player team of prisoners held against their will by a mysterious entity called The Warden, survival depends on a team’s ability to communicate, coordinate, and manage their ammunition — else they doom themselves to a bloody, messy death. To the Warden, they’re all expendable.
Rebirth sets players farther down into The Complex into an area called Floodways — a new environment that substitutes a dark and cold industrial aesthetic for one where nature has sought to reclaim the domain. Further expanding the lore of GTFO, within Floodways are clues as to why players are trapped in The Complex and imprisoned by The Warden.

New to GTFO are Booster Implants, which give players additional incentive to re-enter The Complex. Players can now find valuable artifacts within the game that The Warden eagerly collects. If pleased with their findings, he rewards players with Booster Implants — an ability-buffing injection delivered directly into the brain. Players juiced up with a Booster Implant can enjoy a range of perks such as better weapon handling and faster terminal hacking. Earlier Rundown updates have seen the additions of other gameplay mechanics such as layered difficulty, which gives players the option of choosing different routes through expeditions, ranging from very hard to extreme. Artifacts are delivered to The Warden regardless of completing an expedition, giving players an additional resource when revisiting a Rundown that may have bested them previously. 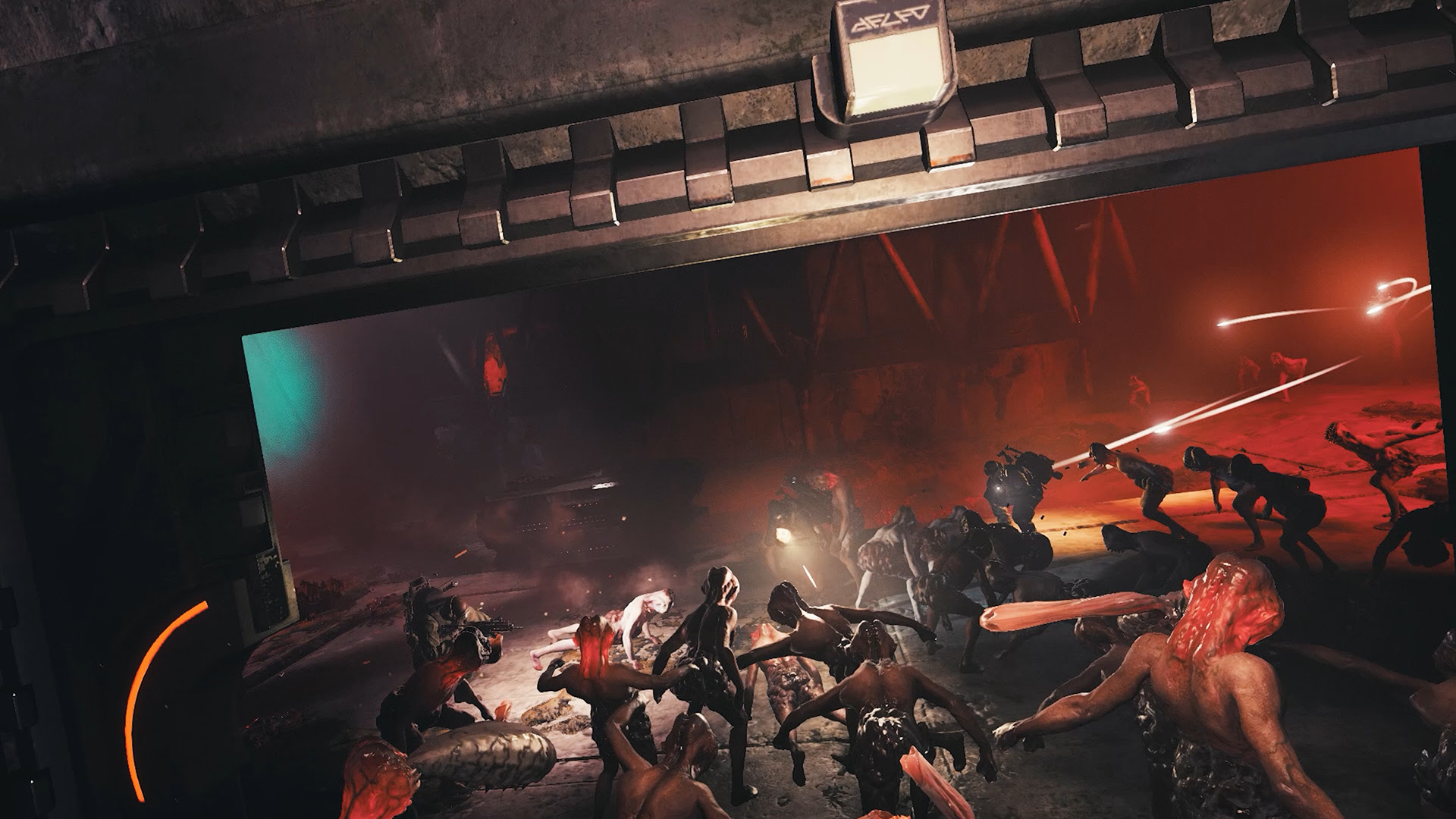 “Brick by brick, we’re laying the foundation for GTFO to exit Early Access as a force to be reckoned with,” said Ulf Andersson, Creative Director of GTFO. “We believe the addition of Booster Implants gives players an optional gameplay mechanic that not only enhances replayability but also accessibility to those facing too much of a challenge when they first start playing GTFO. In combination with layered difficulty and other quality-of-life improvements, we maintain GTFO’s challenging gameplay for hardcore gamers but ensure that new players are welcome into our fantastic community.”

“With Rebirth, we’re also expanding the lore for fans that want to know more about the world we created,” said Simon Viklund, Narrative Director of GTFO. “The new additions found in the Rebirth update offer clues to the background story of the game, providing slivers of new information as to what’s going on, why players are imprisoned in The Complex, and who — or what — The Warden is. Overall, we can’t wait to hear what players think of GTFO’s most significant update to date!”

New in the GTFO Rebirth Update: 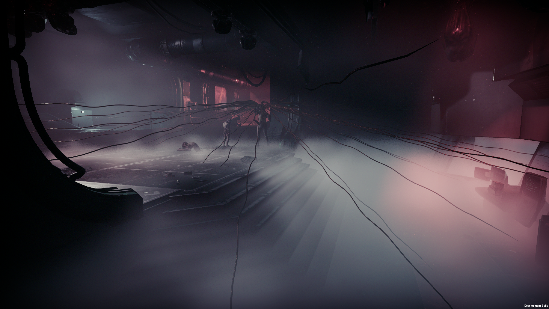 GTFO released on Steam in Early Access in December 2019 and is available for purchase for $34.99. To celebrate the launch of the Rebirth update — which is free to owners of the game — GTFO is on a limited-time sale for 20% off. To purchase the game, please visit https://store.steampowered.com/app/493520/GTFO.

PAYDAY THE HEIST® and PAYDAY 2® are registered trademarks of their respective owners. 10 Chambers AB is not associated with, affiliated with, sponsored by and/or endorsed by them.

Founded in 2015, 10 Chambers is a game studio based in Stockholm, Sweden. The studio was founded by Ulf Andersson, who founded Overkill Software and was the brain behind the PAYDAY franchise. GTFO is the debut title from the studio. More information about 10 Chambers is available at www.10chambers.com.

(April 26, 2021) Over three decades in the making, the graphic novel MONSTERS by legendary comics artist Barry Windsor-Smith is a 360-page tour de force of visual storytelling. Best known for drawing the Conan series of the ’70s and creating several independent comic series of the ’90s — including Young Gods and The Paradox-Man — Windsor-Smith is now releasing his first major work since The Freebooters (2005). Fantagraphics will release MONSTERS on April 27, 2021.

Set in a timeline spanning the 1940s to the ’60s, Monsters centers around young Bobby Bailey, a naïve, emotionally fraught young man with a tragic destiny. The day he walks into a US military recruitment office, little does he know that he will become the subject of a top secret, experimental genetics program with loathsome Nazi origins. Thus kicks off a dizzying chain of cascading events that spin out of everyone’s control as friends, foes, and others are swept into his orbit and must grapple with the earth-shattering ramifications of what this unholy experiment has wrought. As the titular monsters of the title multiply, becoming real and metaphorical, literal and ironic, the story reaches its emotional and moral reckoning.

“After putting so much time and investing so much creative energy in this project,” says Windsor-Smith, “I’m pleased that it’s finally being published.”

“I’ve known Barry for over 50 years now, so publishing his biggest and most artistically mature work to date is a personal and professional milestone for me,” said Fantagraphics publisher Gary Groth. “I’m grateful that he’s entrusted this important work to us.”

Monsters’ vast narrative canvas is part familial drama, part espionage thriller, part metaphysical journey — in sum, an intimate portrait of individuals and an epic political odyssey spanning two generations of American history. Trauma, fate, conscience, and redemption are a few of the themes that intersect in Windsor-Smith’s Monsters. Rendered in Windsor-Smith’s impeccable pen-and-ink technique, this graphic novel is surely one of the most intense and gripping works of visual storytelling ever drawn.

Here’s what people are saying about MONSTERS:

“Barry Windsor-Smith has for over three decades been working on Monsters. Almost twenty years ago I read an unfinished version and was shocked and astonished at the power and delicacy of the storytelling, by the honesty of the family relationships, by the feeling that this was being created by someone willing to reveal too much and go too deep in order to tell the story he had to tell. That it is completed and that it will be released to the world is something that's genuinely exciting for any of us who care about comics, or stories, or the place where art and imagination meet.”― Neil Gaiman, New York Times bestselling author

“Any time Barry Windsor-Smith decides to put pen to paper, it's worth paying attention, but the publication of Monsters feels especially momentous even when you consider his illustrious career. ... Barry Windsor-Smith remains a master of the form, and Monsters is proof.”― Syfy Wire

“Consummate craftsman Barry Windsor-Smith presents an epic tale of love, horror, revenge, and redemption in his outstanding graphic novel. ...Years in the making, Monsters is a graphic narrative masterpiece and a haunting examination of the lingering effects of evil.”― Foreword Magazine (starred review)

“The illustrations are in black and white and finely detailed, with shadows enhancing an ominous tone, and readers of political and supernatural thrillers, sf, and historical fiction with a vein of forbidden love will all enjoy this book.”― Booklist

Posted by Monster of the Week.com at 3:00 AM No comments:

Edgar Award-nominated Writer Harold Schechter and THE GOON Creator Eric Powell To Present “DID YOU HEAR WHAT EDDIE GEIN DONE?”

Present “DID YOU HEAR WHAT EDDIE GEIN DONE?”

An Original Graphic Novel about Ed Gein, The Serial Killer Who Haunted America and Inspired Psycho, The Texas Chainsaw Massacre and The Silence of the Lambs

Eric Powell—the legendary creator of comics like The Goon and Hillbilly—and Harold Schechter—the author of true crime classics including Deviant and The Serial Killer Files—are collaborating on an ambitious new graphic novel about one of the most notoriously deranged murderers in American history, Ed Gein.

Powell and Schechter are co-writing DID YOU HEAR WHAT EDDIE GEIN DONE?, an all new, 200-page, original graphic novel illustrated by Powell that delves into the twisted history of the Gein family and the notorious violence that inspired Psycho, The Texas Chainsaw Massacre, and The Silence of the Lambs. Painstakingly researched and illustrated, Schechter and Powell’s true-crime graphic novel presents Gein’s infamous story like never before.

“This book takes Gein’s gruesome crimes out of the realms of exploitation and delivers a powerful, fact-based dramatization of the tragic, psychotic, and heartbreaking events,” said Powell. “Because, in this case, the truth needs no embellishment to be horrifying.”

“Obviously Ed Gein’s story has been fictionalized many times in the movies,” said Schechter. “In no visual medium, however, have the bizarre inner workings of his mind been explored and portrayed. The graphic novel is the perfect medium to conduct such an exploration. DID YOU HEAR WHAT EDDIE GEIN DONE? will not only bring the factual details of Gein’s crimes to vivid, compelling life but draw the reader into the phantasmagoric realm of his uniquely deranged psyche.”

“The case of Ed Gein is terrible, tragic and fascinating.” said Powell. “This story is not just about Gein and his crimes, but also how a society tried to deal with the shocking facts of these crimes and the idea that the quiet neighbor next door could be a real life bogeyman. The after effect it had on our culture, especially pop-culture, cannot be overstated.”

Harold Schechter is an American true-crime writer who specializes in serial killers. Twice nominated for the Edgar Award, he is the author of the nonfiction books Fatal, Fiend, Bestial, Deviant, Deranged, Depraved, The Serial Killer Files, The Mad Sculptor, and Man-Eater; the Amazon Charts and Washington Post bestseller Hell’s Princess: The Mystery of Belle Gunness, Butcher of Men; the Amazon Original Stories collection Bloodlands; and Ripped from the Headlines. Schechter received his PhD in American literature from the State University of New York in Buffalo. A professor emeritus at Queens College, he is married to the poet Kimiko Hahn. For more information, visit www.haroldschechter.com.

Posted by Monster of the Week.com at 10:46 AM No comments: 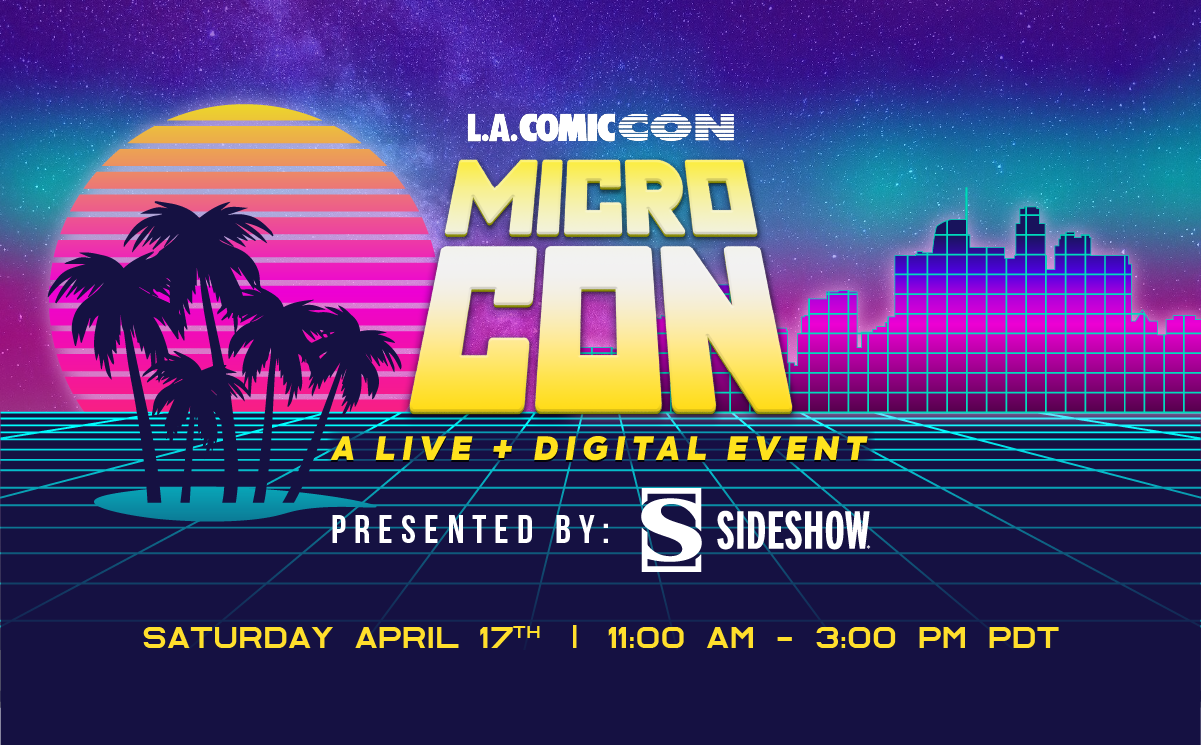 NFTs earned will be selected at random, so duplicates may be included.

NFTs will be deposited in a digital wallet to the purchaser on April 19th.