(November 9, 2020) In 2021, legendary HELLBOY creator Mike Mignola, co-writer Tom Sniegoski, artist Craig Rousseau, colorist Dave Stewart, and letterer Clem Robins will explore an untold chapter of Hellboy’s childhood in YOUNG HELLBOY: THE HIDDEN LAND. In this four-issue series from Dark Horse Comics, Hellboy and Professor Bruttenholm are stranded on a strange island after a mishap on their way to a South American dig site. They soon find themselves confronted by all manner of monsters, and even when the stranger who rescues them turns out to be one of Hellboy’s heroes, they aren’t as safe as they think they are. The four issue mini-series features covers by Folklords artist Matt Smith. Mignola and award-winning colorist Dave Stewart provide the variant cover for the debut issue, with subsequent issues featuring variant covers by Rachele Aragno (#2), Wylie Beckert (#3) and Anthony Carpenter (#4).

“Awhile back (when you could still do such things) I was at a convention in Boston and ducked out for lunch with Tom Sniegoski,” said Mignola. “Years earlier we co-wrote a more-than-slightly insane novel together, GRIM DEATH AND JOE THE ELECTROCUTED CRIMINAL, and I brought up the idea of the maybe slightly insane globetrotting adventures of a very young Hellboy. Tom’s eyes lit up, as I kind of knew they would. So there was half the battle won, but we would need a special kind of artist to bring Tom’s madman energy to the page—and artist Craig Rousseau just happens to be that artist. And Craig just happened to be at that same convention, and when I told him the idea his eyes lit up just the way Tom’s had. It was almost too easy, and I’m happy to say the results are everything I could have hoped for.”

“YOUNG HELLBOY: THE HIDDEN LAND is another look into our red-skinned paranormal investigator’s childhood,” said Sniegoski. “The events in the series take place in May of 1947, before the events depicted in HELLBOY: THE MIDNIGHT CIRCUS. Lighter in tone, YOUNG HELLBOY: THE HIDDEN LAND is an exhilarating adventure that embraces the thrills and chills of the pulp adventure stories of the 1930s. Mysterious islands, vampire queens, dinosaurs, giant ape gods, and a new and exciting addition to the Hellboy Universe—Scarlett Santiago, the Sky Devil. I’ve always been fascinated by the glimpses into Hellboy’s childhood that Mike has given us, and to be asked to contribute to these stories, along with Mike, Craig, and Dave, is a dream come true.”

“This may sound like a cliché, but as a fan of Hellboy since he arrived in Mike’s very first issue, it’s been an absolute thrill to work on this project with Mike and Tom and Dave,” said artist Craig Rousseau. “Getting to play in this universe with a story so full of over-the-top action, adventure, and fun has been an absolute blast and a career highlight."

YOUNG HELLBOY: THE HIDDEN LAND will debut from Dark Horse Comics in comic stores on February 17, 2021, retailing for $3.99.

Posted by Monster of the Week.com at 9:02 AM No comments:

Featuring All New Covers by Mike Mignola and Dave Stewart 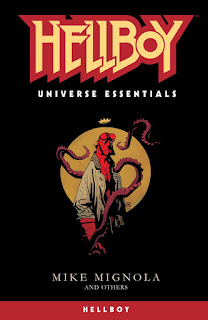 (October 28, 2020) The stories of the Hellboy Universe are some of the most celebrated and beloved in comics fandom. Blending folklore, horror, mythology, action, and adventure, legendary Hellboy creator Mike Mignola and a host of celebrated writers and artists have chronicled the adventures of Hellboy, the Bureau for Paranormal Research and Defense, Lobster Johnson, and Sir Edward Grey for more than two decades. Beginning in 2021, Dark Horse Books will publish four volumes of essential Hellboy Universe stories, all selected by Mike Mignola, each featuring all new covers by Mignola and award-winning colorist Dave Stewart.

“In some cases—B.P.R.D. and Witchfinder—it was pretty easy to select the one “essential” book,” said Mignola. “Hellboy was more complicated, as there is so much ground to cover. In the end we chose to go with a collection of short stories rather than a single graphic novel, to give more of an overview of the character. We chose certain stories that say important things about his background, but also some that just show what he does and how he does it. A couple of stories are in there just because they are my favorites.”

“From ‘The Corpse’ to ‘Pancakes,’ these standalone stories are the perfect way for new readers to get a feel for Hellboy and his world,” said HELLBOY editor Katii O’Brien.

HELLBOY UNIVERSE ESSENTIALS: HELLBOY will be available in comic stores on July 7, 2021 and in bookstores on July 21, 2021. The trade paperback is available for pre-order now.

Mike Mignola’s fascination with ghosts and monsters began at an early age; reading Dracula at age twelve introduced him to Victorian literature and folklore, from which he has never recovered. Starting in 1982 as a bad inker for Marvel Comics, he evolved into a not-so-bad artist. By the late 1980s, he’d begun to develop his unique graphic style, with mainstream projects like Cosmic Odyssey and Batman: Gotham by Gaslight. In 1994, he published the first of many Hellboy series through Dark Horse, leading to many spinoffs, prose books, animated films, and two live-action films. Along the way he worked on Francis Ford Coppola’s film Bram Stoker’s Dracula (1992), Disney’s Atlantis: The Lost Empire (2001), and with director Guillermo del Toro on Blade II (2002), Hellboy (2004), and Hellboy II: The Golden Army (2008). A new Hellboy film by Neil Marshall will be released this spring. Mike’s books have earned numerous awards and are published in a great many countries. He lives in Southern California with his wife and cat.

Dave Stewart was born on the high desert, while his mother danced to the chatter of a rattlesnakes tail. Despite a rare case of Sasquatch leg and the desire to run with any north bound moose migration, he found the coloring arts were a suitable profession to fuel the resources needed to build a moonshine still in the backwoods hills of Southwest Portland. Much to his surprise he found that his coloring garnered him industry awards, unlike his feverish gathering of dry leaves for winter bedding. And he colors on.

For more than thirty years, Dark Horse Comics has proven to be a solid example of how integrity and innovation can help broaden a unique storytelling medium and establish a small, homegrown company as an industry giant. Founded in 1986 by Mike Richardson, the company is known for the progressive and creator-friendly atmosphere it provides for writers and artists. In addition to publishing comics from top talent, such as Eric Powell, Mike Mignola, Geof Darrow, Brian Wood, Gail Simone, Stan Sakai, and Guillermo del Toro, and comics legends, such as Will Eisner, Milo Manara, Kazuo Koike, Neil Gaiman, and Frank Miller, Dark Horse has developed its own successful properties, such as The Mask, Ghost, X, and Barb Wire. Its successful line of comics, manga, and products based on popular properties includes Dragon Age, Buffy the Vampire Slayer, Aliens, Conan, Tomb Raider, Halo, The Witcher, Serenity, Game of Thrones, and Avatar: The Last Airbender. Today, Dark Horse Comics is the largest independent comic book publisher in the US and is recognized as one of the world’s leading entertainment publishers.