Batman: The Return of Bruce Wayne
Batman: The Widening Gyre
Fables: Witches
D.C.'s Blackest Night
The Amazing Screw-On Head and Other Curious Objects
Thor: The Mighty Avenger
Posted by Monster of the Week.com at 7:04 PM No comments:

Theme for May 2011 Comic Art:Supergirl
Posted by Monster of the Week.com at 9:18 AM No comments: 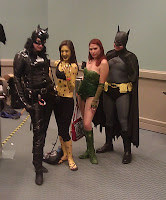 I attended my first Long Beach Comic Expo 2011 this year and did have fun even though the venue was smaller than expected and some locations blocked off due to filming.

The Long Beach Comic Expo is indeed a small comic convention, it doesn’t use the main convention center’s ballroom (compared to the regular Long Beach Comic Con) and actually the event is held in one of the side banquet rooms. Even though the room and Expo event wasn't gigantic by any means, the room was packed and by noon you could expect to bump into people while traversing the aisles or going through comic long boxes.

I originally thought that since the convention hall was small that I would be out of there in less than an hour… I ended up spending most of the day there mostly checking out the artist area and a few comic booths. You could actually walk through and see all the booths in about 10 minutes if you wanted to at a brisk pace.

I arrived an hour early to the Long Beach Convention Center and since the Expo is a one-day event compared to the 3-day Long Beach Comic Con, I was able to park in the main parking lot underneath the center. I recommend arriving early to park in the underground parking since if you plan on buying items and do not want to haul them around all day, being able to hop into the elevator and drop-off the items in my car multiple times was a plus.

This is a comic-related focused event, and unlike the LBCC or Wizard World Anaheim shows, there were no “celebrities” manning booths here. Booths were primarily comic-oriented with a good amount of golden/silver/bronze age dealers, comic artists (seasoned & independent) as well as a few booths selling cosplay-related goods.

Personally, I’m a modern comic reader/collector and this Expo only had a few booths selling modern comics. Bargain hunters note that I spotted only a three bargain-related booths; one booth with a couple short boxes of 50 center comics and a big booth selling dollar comics that was packed full of buyers throughout the day.  I still prefer the Frank & Sons event for bargain-basement cheap reads, but I was able to get a backpack full of comics here as well to help fill in some gaps in my collection.


Since the Con lacked wide-berth spacing, I was constantly being bumped into while looking thorough boxes in the floor where someone would end up swooping above my head or bumping into me if they didn’t pay attention that someone was indeed on the floor. I had to stand up and elbow a few people off me a couple of times for those that don’t realize a thing called “personal space.” Thank goodness I’m not a scrawny little geek and doesn’t mind standing up to let people know to back off me to give me some breathing room. As usual, there were some smelly con-attendees there; oddly they mostly consisted of late-middle aged gentlemen.
The main reason to attend the Expo you ask? The artists and professionals there of course! Almost half the booths at the event were manned by artists, publishers, writers, etc. I was able to bring some comics from my collection and get them signed by notables such as Bernie Wrightson, Mike McKone, Marv Wolfman, Drew Johnson, and Eric Canete. I ran out of time the night before otherwise I would have looked through my collection a bit more thoroughly to find some Trent Kaniuga, Dustin Nguyen, and Peter Nguyuen comics for them to autograph. I was bummed that Peter Nguyuen was the artist on Secret Six (which I dig a lot) and I have at home, but didn’t realize he was attending.
Note to the Long Beach Comic Con program writers: When you list the artists attending the show, it would be very helpful if you can include next to their name the comics they worked on as a quick reference.
With the small venue, you were assured being able to communicate directly with the artists and get yourself a print, sketch or original art. I ended up purchasing several original art pieces as well as getting a couple sketches. Conventions like these I think help visitors get into learning about artists they may never have dealt with or know about their work before. Generally some basic sketches ranged from $40 for head/busts to $80+ for full body commissions. Don’t have a lot of cash to splurge on OA? Go ahead and support your artists and help pay for their booth by buying an art print or sketchbook. Most of the artists there were mainly amicable and nice to talk to. My suggestion for artists looking to sell sketches or drum up more traffic to their booths? Smile, there were a few “name” artists that weren’t too happy looking sitting at their booths which I think contributed to their less than stellar audience traffic.
I did enjoy artist’s booths with low general sketching prices. I missed out on one artist that was selling roughs and preliminary sketches for between $10-$20 that I planned on buying but missed out since he packed-up earlier than the show’s closing and I was caught up at another booth.

Shame that a couple aisles and the front of the center were blocked off where they were filming some web-show thing and the crew kept telling people that certain areas you couldn't walk into.

The positive part was the artists for me (I'm not a big GA/SA comic collector), so being able to meet, get signatures/sketches/OA was cool. Some artists seemed very busy throughout, though some did start packing up around 4p.m. Most of the artists did say they were planning on attending the Wizard World Anaheim Convention, a few saying only on Saturday though.

A few Cosplayers attended with mainly the Star War’s 501st Legion group in full-force. Since the ballroom was small, there was not much space for the cosplayers to march around and show their wares. Many of the cosplayers were nice and didn’t mind picture taking with some of the attendees.
Looking forward now to the full-blown Long Beach Comic Con in October!

Posted by Monster of the Week.com at 6:50 PM No comments: