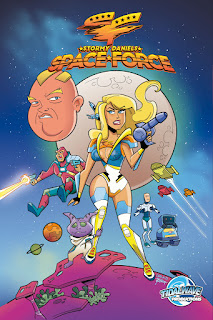 ONTARIO, CANADA – Gaelstone Media, the studio known for the creation of the Anthroverse and acquisition of Panda Khan, has partnered up with Tidal Wave Productions to develop and produce an animated version of Tidal Wave’s Stormy Daniels: Space Force comic book.

In Tidal Wave’s Stormy Daniels: Space Force, Captain Stormy Daniels commands the Helix, a starship serving the United Republic of Earth and its leader, “very stable genius” OrDon. Daniels and her crew – capitalists at heart – are for hire. It is Barbarella-meets-Star Trek-meets-Stripperella in a racy comedy, action and adventure series starring Daniels.

Gaelstone Media will be working directly with Tidal Wave Productions’ Darren G. Davis, Bohemia Group, and Stormy Daniels to develop Stormy Daniels: Space Force into an animated series and help it find a home on a network or streaming service.

“Gaelstone Media are honoured and humbled to be working with such an amazing company as Tidal Wave Productions, Darren G. Davis, Stormy Daniel and the entire crew to bring this fantastic project to life”. Says J. Robert Bryans, CEO, Founder and Co-Creative Director of Gaelstone Media. “Stormy Daniels: Space Force comic book is a perfect contender for the aged-up, adult geared animated market. If you are a fan of strong, if not at times racy female led stories like Stripperella, you will enjoy the thrills, chills and sometimes spills in this series”.

Twitter: https://twitter.com/GaelStoneMedia
Posted by Monster of the Week.com at 7:51 AM No comments:

Brings GHOSTS ARE PEOPLE TOO to Kickstarter

A 42 page Illustrated Book about a Simple Ordinary Ghost, For Spooky Living People of All Ages

(October 19, 2020) The award-winning writer, director, musician, and cartoonist Peter Ricq is bringing his first ever illustrated prose book to Kickstarter. GHOSTS ARE PEOPLE TOO is a 42 page illustrated book, written and drawn for spooky living people of all ages, about a simple ordinary ghost named Ethan Alby.

Ethan has a family—just like you. He likes playing with toys and his dog, Mini Ricky. Sometimes, though, Ethan gets scared. In GHOSTS ARE PEOPLE TOO, Ethan shares what scares him, how difficult it is to share a home with a living girl he's fallen for (when she doesn't even know he exists), and why we shouldn't be afraid of one another.

“This book is a helpful guide to getting along with ghosts,” said living author Peter Ricq. “Ghosts are people just like you and me, and they can be afraid of us just as much as we are from them. We should take the time to learn from one another and become friends. And, really, this should be applied with real living people and not only the supernatural.”

GHOSTS ARE PEOPLE TOO is a charming spooky book for readers of all ages, especially young readers, adolescents and adults who love Tim Burton’s books and films, as well as the novels and picture books written by Neil Gaiman, and most especially fans of Edward Gorey's The Gashlycrumb Tinies. “I should warn you, “ said Ricq. “This book is a lot more light-hearted than Gorey's book!” GHOSTS ARE PEOPLE TOO contains seven surefire ways to find a ghost and three true, friendly ghost stories.

GHOSTS ARE PEOPLE TOO is the first ever illustrated book by Peter Ricq. Readers may already be familiar with Peter Ricq for his acclaimed animated show “The League of Super Evil” which aired on Cartoon Network and Disney XD. Or maybe they've seen his directorial debut “Dead Shack” which screened around the world and was awarded the Silver Prize for the Best Canadian Feature at Fantasia. Or, perhaps, they are a fan of his band HUMANS which played SXSW and were nominated for a JUNO for their full length debut in 2015. Or, it could be, they’re a fan of his three graphic novels, all of which have been funded on Kickstarter. But there’s nothing that can prepare them for the haunting charm of GHOSTS ARE PEOPLE TOO.

“Halloween season has been my favorite season since I was a child,” said Ricq. “It had a sense of danger and adventure and that feeling has never dissipated since. I remember watching Fright Night and The Thing from Outer Space coming home from Trick or Treating when I was around 7 years old and those moments of counting your treats along with the excitement of monsters on the TV was so magical, more so than any other holiday. I've since always had a touch of horror, danger, and adventure in my work since."

Posted by Monster of the Week.com at 8:00 AM No comments:

Labels: GHOSTS ARE PEOPLE TOO

Plus, The Second Season of the All-Star Snark Fest is Collected as a Trade Paperback

(Sep 22) AHOY Comics, the independent, Syracuse-based publisher known for its comics stuffed with stories, poetry, prose fiction, and cartoons, is bringing back its snarkiest, booziest anthology under a new title: EDGAR ALLAN POE’S SNIFTER OF BLOOD. The most recent season of the hilarious parody-slash-desecration of Edgar Allan Poe will also be collected as a trade paperback just in time for the spooky holiday season.

Since its first issue debuted in 2018, the SNIFTER series has artfully mangled classic literary tales and dreamed up brand new ones with its signature blend of humor and horror. The nightmare-child of Drunk History and Tales from the Crypt, this anthology-style series features a charmingly alcohol-damaged version of Poe who presides over the woeful and witty stories created by a variety of talented artists and writers. The latest installment of the SNIFTER series, now renamed EDGAR ALLAN POE’S SNIFTER OF BLOOD, includes Paul Cornell (Doctor Who) and Russell Braun (The Boys) reimagining Poe's "Black Cat" as a dog, as well as a tale in which Mr. X creator Dean Motter settles the science vs. religion debate once and for all. The new series will feature a different cover artist each month, starting with the legendary Jill Thompson.

"Since Edgar Allan Poe is dead, we get to make any arbitrary decision we want and there's not a thing he can do about it," said AHOY editor in chief Tom Peyer. "So sometimes we just make a senseless power move out of sheer contempt for the great writer and his memory. Plus, we get to start again at #1, which should attract all of the most devoted comics collectors of 1991. Everybody wins! Except Poe."

Just prior to the new season’s publication date, the second and most recent season of the series will be available in trade paperback for the first time under the title EDGAR ALLAN POE’S SNIFTER OF TERROR, VOLUME TWO. Featuring more of the popular “Monster Serials” by Mark Russell (SECOND COMING) and Peter Snejbjerg (The Books of Magic), wherein we discover the terrifying secret origins of certain iconic cereal monsters, as well as Dean Motter and Alex Ogle’s ultimate Poe mashup “The Tell-Tale Black Cask of Usher,” the trade paperback will also feature more than a dozen additional comics stories, a generous selection of short “Poe and the Black Cat” strips by Hunt Emerson, and horrific bonus prose stories and poetry.

Posted by Monster of the Week.com at 12:54 PM No comments:

...Where the Victim is a 7-Foot Lizard Reptilian Overlord and The Detective is a Bisexual Drug-Dealer Who Can’t Find Her Pants

(Oct 1) New digital publisher NeoText’s latest novella is MIDNIGHT 99, an outrageous, mind-bending take on the classic whodunnit tale—where the victim is a 7-foot-tall Lizard Reptilian Overlord and the detective is too blitzed to remember how he ended up dead on her toilet in the first place. Written by debut writer Ashley Christine and featuring art by WBYK, the phantasmagoric dystopian romp will be available digitally on October 6th.

Meet Tulsa Kalhoun. Once upon a time she was a well-respected, pantsuit-wearing broadcast journalist— until an inconvenient supernatural awakening left her career and sanity in tatters. Now she stumbles through this world peddling a private pharmacy of perception-expanding herbal narcotics, made with plants you’ve never heard of from places not found on maps. But when Tulsa wakes up in a hotel bathroom on the eve of the secret unveiling of Earth as the ultimate Reptilian vacation destination, blacked out from a particularly indulgent vision quest bender, she knows that she's supremely and epically screwed. Because a supposedly unkillable Lizard Overlord named Doug is dead on the toilet.

With no memory of what happened— and an ever more tenuous hold on the daily cocktail of alien pharmacologicals that barely keep her tethered to this plain of existence—Tulsa has to retrace her steps searching for clues of how she got to her current predicament. She’ll have to wade through a swamp of daunting challenges and colorfully shady characters like the Illuminati, the Youthinati, debauched Reptilian tourists, kinky gray aliens who are way too into butt stuff, Neckties, Necronauts, off-brand soda, her super-hot half-human half-Lizard ex-girlfriend, and her own self-destructive tendencies.

“MIDNIGHT 99 is a reaction to my frequent existential angst of living on a planet that my species is slowly destroying,” said author Ashley Christine. “When I couldn’t find an answer as to why we humans are so out of sync with our environment, I made up my own—which is that giant Reptilian space Lizards are using humans to terraform planet Earth to an ideal Lizard temperature. They also created the patriarchy, wealth inequality and were producers of Eddie Murphy’s 1985 hit ‘Party All The Time.’ Also, as a genderqueer/non-binary woman and unabashed eccentric, I wanted to create a character that someone like me could relate to. Enter Tulsa Kalhoun, a chaos-baiting, genderfluid, bisexual dumpster fire of a human being. She’s the unholy spawn of Hunter S. Thompson, Grace Jones, and Tank Girl. She is loud, unapologetically herself and always just a little bit horny.  Like me, she’s queer and a weirdo—a queerdo. Which is a word I just made up. And trademarked.”

Part fun romp, part laxative, and part commentary on capitalism, global warming, the limits of human perception, and lizard dicks, Ashley Christine’s debut novella MIDNIGHT 99 is a consciousness-expanding odyssey for the mind and genitals that will keep you guessing at every turn. It will be available digitally on October 6th for $2.99.

Posted by Monster of the Week.com at 6:00 AM No comments: