Here begins the tale of the dawn of the Jedi, the Star Wars of 25,000 years ago--before light sabers, before hyperspace travel, before the Jedi spread throughout the galaxy, when connections to the Force were new.

On the planet Tython, a group of beings--scientists, philosophers, and warriors--strive to maintain peace and to balance the mystic Force.

So you've been wanting to read about the Star Wars’ Jedi group before they were even truly Jedis with all the cool light sabers, lighting bolts and amazing acrobatics? Well then this is for you!

I for one was underwhelmed with the new batch of characters introduced in this series where you only get an inkling of where the beginnings of the Jedi sprouted from.

Apart from a couple fleeting pages of good/bad Jedi using their powers to help/dwindle the masses the main plot point is lost in the yawn-inducing series.

The lone bright point is the artwork by long-standing comic mainstay, Jan Duursema which manages to capture new alien characters and worlds.

Hopefully the second volume jacks up the adrenaline to make the series more worthwhile as a big collection than this initial volume.

Written by Darwyn Cooke Art and cover by Tim Sale

The amazing story from SUPERMAN CONFIDENTIAL #1-5 and 11 by Darwyn Cooke (DC: THE NEW FRONTIER) and Tim Sale (BATMAN: THE LONG HALLOWEEN, Heroes) is collected in hardcover. While Superman attempts to survive his first encounter with Kryptonite, will Lois Lane fall prey to a mysterious stranger?

You would think that an awesome pairing of comic book heavy hitters such as Darwyn Cooke (Catwoman, New Frontier) and Time Sale (Batman: The Long Halloween, Hulk: Gray) would knock it out of the park since their threading on familiar water with Superman.

With Cooke having portrayed him in New Frontier and Sale working on him with his writing-partner Jeff Loeb on the excellent Superman For All Season; but no this hardcover falls flat with a thud.

The plot ties in a previously Krypton artifact and a semi-Tony Stark/mobster style semi-villain along with the nefarious Lex Luthor and Lois Lane tagging along on the plot.  Superman becomes more of a throwaway side character in this story.

The art is typical Tim Sale with some awesome retro-50s style designs for architecture and costumes. If you’re looking for the all-encompassing “wow” or even a nostalgic storyline in this series, I believe you will be disappointed.

The art is indeed serviceable, but the pedestrian story here looks like it could've been a part of an anthology series instead of headlining as a stand-alone hardcover.

1. The Floor
The convention was held in the distinctly older Riviera casino and the show floor and parking area show it's age. Thankfully the set-up and floor space were done to allow maximum space between booths and tables so there was no back-up that lasted significantly.

Ticketing pick-up took longer than expected and the lack of volunteers and staff did prolong wait and show information. The overall experience though was successful in that you can readily figure out the location and spots of the booths and artists you were looking for since the space isn't enormous and the wait times to meet creators didn't stretch hours like SDCC. The longest wait both Saturday and Sunday was for Jason Scott Campbell who continually had a long line but was significantly faster moving than at other conventions I've seen him at (see the line photos below for JSC). 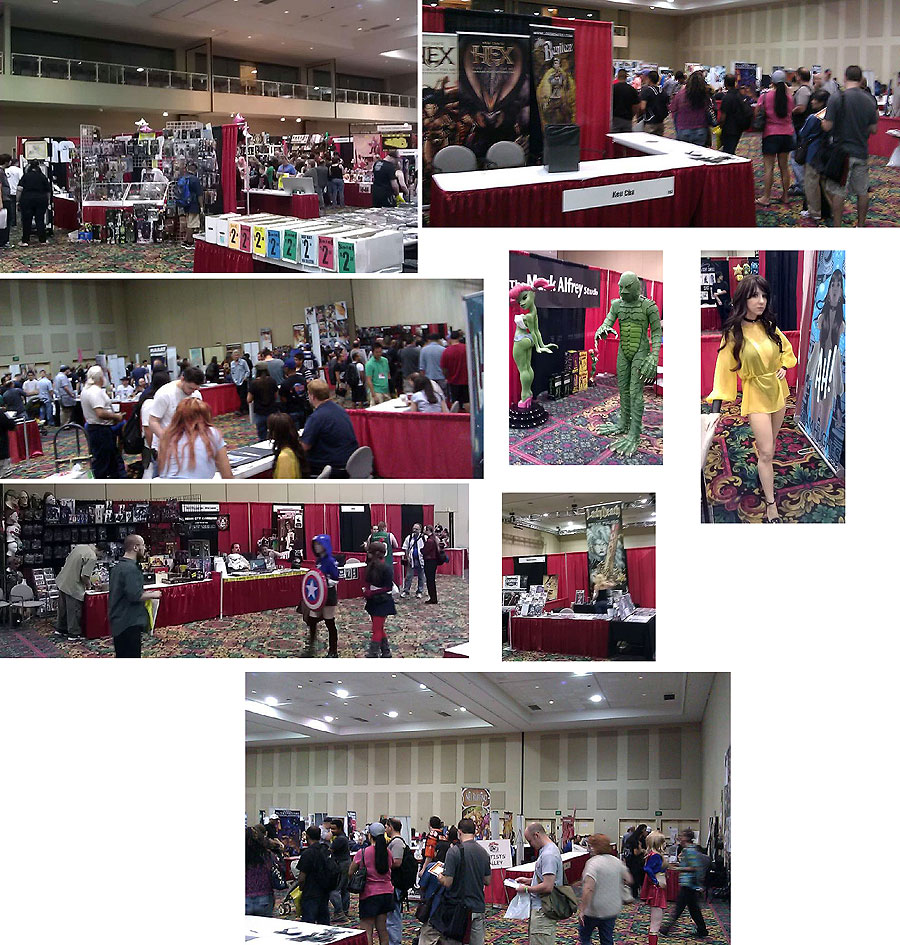 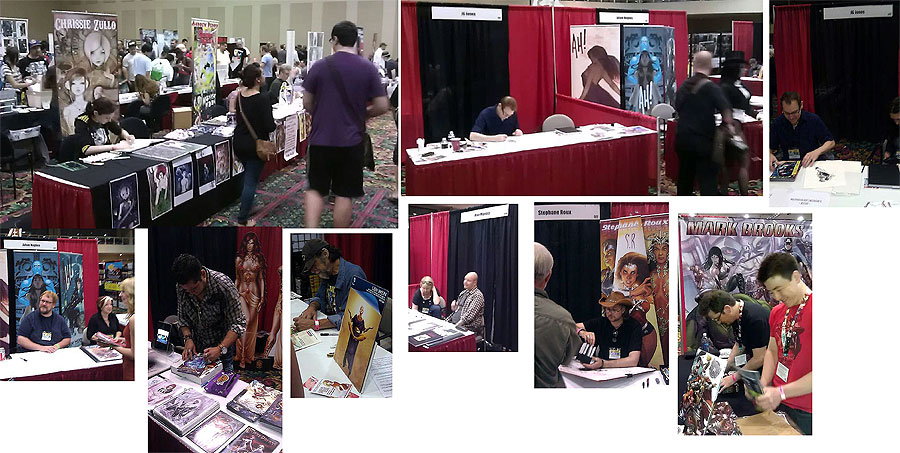 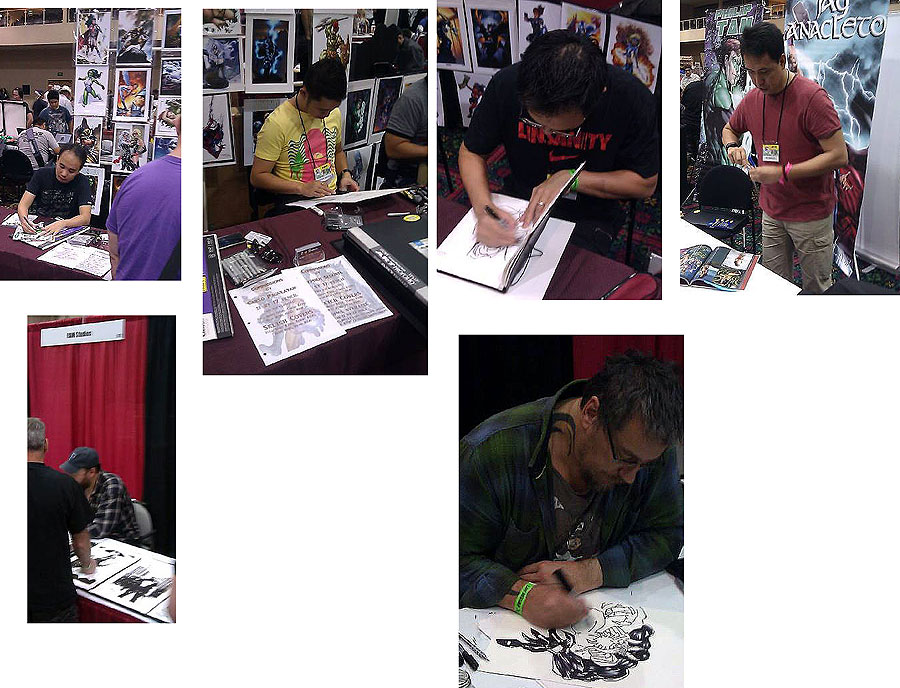 Posted by Monster of the Week.com at 4:48 PM No comments:

There came a day! A day unlike any other...when two of Marvel's top creators teamed up for the very first time to create a bombastic new Marvel series that not only ushers in the Heroic Age of Marvel Comics but unleashes onto the world the most blockbuster Avengers team ever! Who will answer the call? And will they assemble just in time?

Well another Avengers series reboot has come and gone but this new version by long-time Avengers mainstay, Brian Michael Bendis, keeps the ball rolling from his previous volume.

With the blocky-art return of John Romita Jr. managing to step-up a notch over the flabby A vs. X series this titular title continues the ball rolling and with the 1-st tier stars as Captain America, Iron Man, Thor, Wolverine and the rest come back for more face-bashing, time-spanning excitement.

The storyline is nice with the typical benis decompressed story and character chit-chat, but the JRJR art and spotty inking would have been nicer if tightened up a bit more.

I just picked up the James Robinson "Leave it to Chance" book from the 90s and on the back page of the books Wildstorm was selling original art pages from their studio that you could purchase directly from them.

Now I thought pages from '96 would have been cheaper, but it looks like even back then the prices for the "name" artists were still steep back in the days.

Prices listed below due to the bad photos. 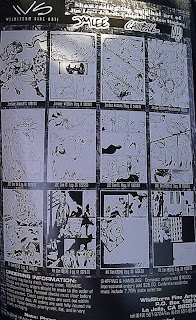 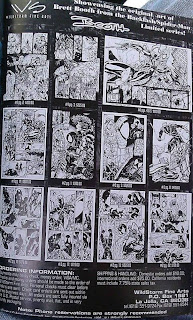 Posted by Monster of the Week.com at 11:37 AM No comments:

OVERVIEW
Struck by a bolt of lightning and doused in chemicals, Central City Police scientist Barry Allen was transformed into the fastest man alive.

Tapping into the energy field called The Speed Force, he applies a tenacious sense of justice to protect and serve the world as The Flash! The Fastest Man Alive returns to his own series.

One of the few outstanding bright spots in the DC New52 re-launch, the paring of previous Flash series artist, Manapul and colorist Brian Buccellato now mashed together as co-authors as well. The rebooted Flash keeps the legacy grounded with the silver age Barry Allen assuming the role of The Flash from the very beginning, ousting the use of former series hero, Wally West who is nowhere seen in this series. The original Flash, Jay Garrick kicks off his own New 52 series in Earth2, this time as a younger version of himself.

The art is gorgeous with Francis Manpul’s layouts structured in very daunting comic-bookish ways that stands out along with the initial Batwoman series by J.H. Williams. The colors are watercolor-like in presentation and again makes it stand out from other overtly computer-colored comics on the stand.

The storyline though is a bit convoluted with a new protagonist named Mob Deep, who’s initial story line and mystery doesn't really rev up the series and sputters near the end of the arc. The re-imagined Captain Cold though stood out, and hopefully the introduction of the new Rogues will continue the upward spiral of this series.

3 out of 5 MONSTERS
Posted by Monster of the Week.com at 3:24 PM No comments:

Superman: Return of doomsday
Batman: Noel
Posted by Monster of the Week.com at 8:23 PM No comments:

The Image Comics Co-Founder, Larsen,  was happily signing books and taking photos with fans as well as sketching commission artwork ($200-$300) for his fans and a few lucky attendees who won raffles for a quick sketch as well. 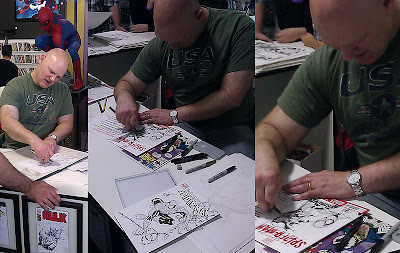 Posted by Monster of the Week.com at 7:00 PM No comments: