Deals of the Week: Shoes Galore 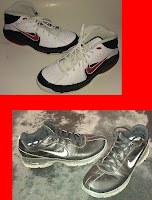 Picked up back-to-back shoes at the local thrift store a couple weeks ago some pretty slick kicks. Also found a pair of basic black Nike golf shoes for $15.00 that were replacing a pair of busted-up Nike golf shoes as well. Prior to heading out of the store a nearly new pair of white/black/red basketball shoes caught my eye for $13.00.
Threw them both into the washing machine and a couple days outside in the sun and they looked almost brand new!
Posted by Monster of the Week.com at 12:00 AM No comments:

Just in case you need to convert files to .swf, I ended up using this Any Video Converter freeware off Download.com and one of the few converters allowing .swf conversion.
Posted by Monster of the Week.com at 11:55 PM No comments:

Computer Issues: Plugged in, Not Charging Battery Issue on Windows 7 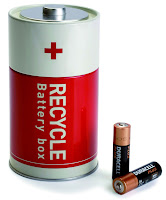 This issue just happened to me tonight after I did a Windows Update and turned on my eMachines, Win7 laptop (less than 10 months old) that started to show me the "Plugged in, not charging message" that I initially thought was due to the recent Windows update.


First I just turned off the laptop and removed and placed back the battery. Once I booted up and plugged the adapter in it showed 100% charge, but when I removed the cord, the battery setting read 96%. When I plugged the cord back in it read 100% still. So I knew there was an issue.

It does look like you have to do the disable, unplug AC, shutdown, then replug, boot-up to get the charge to start working again since when I just disabled/enabled, nothing changed.

Here are two ways to try and get your battery charging again.

Posted by Monster of the Week.com at 12:38 PM No comments:

SUMMARY
I've earlier purchased about $25 worth of comics the month prior, but during last December Midtown Comics had a good 30%-40% off back issue sale that I couldn't pass up to help fill my collection.
I purchased some mostly moderns with a stack of Bronze issue Vertigos. Conditions were from VG-FN and upon initial inspection look as so. Only disappointment I have along with the previous order was one comic book I needed to complete my run was out of stock. This particular DC comic I ordered last month and appeared available, but when my order was fulfilled it was marked us unavailable. So when I was purchasing the following month and the issue was shown as available I ended up picking it again instead of buying it from MyComicShop.com since the price was a bit lower. Unfortunately for the second time when my order was fulfilled the comic was marked unavailable once again.
While Midtown Comics does have a nice selection of comics, their backlog of older pre-90s back issues are lacking compared to MyComicShop.com, but they do shine in their packaging which come boxed tightly and using some big bubble wraps. The comics also came packed bagged and boarded which trumps MyComicShop.com's bagged-only shipment.
Shipment was odd since while I did receive an update within three business days, the package was initially ground shipped via UPS to a central facility in my state and then shipped a second time via USPS  which I thought if it was shipped directly via Postal would have arrived a few days earlier. My first shipment initally seems to hang around the UPS sorting facility for a couple days before it was finally tracked again on USPS.
Ordered over $75 get free standard shipping.
OVERALL
Midtown Comics would rate close to a 4 out of 4 for me only if the availability of a particular comic didn't end up out of stock in two particular instances where it was ordered as well as if they had a wider range of back issue selections.
Pricing, fulfillment and shipment were adequate and refunds on missing comics were prompt and overall experience a positive. It would be nice if their Want List button was available during invetory search without having to drill down into the particular comic's description page (MyComicShop.com has a more streamlined Want List set-up)
Sign-up for their newsletter and receive member-only coupon codes for discuounts.
Rating: 3.5 out of 4 Monster Stars
Posted by Monster of the Week.com at 10:40 AM 1 comment:

SUMMARY
Purchased around $50.00 worth of bronze, copper and modern age comics from the only store mycomicshop.com aka Lone Star Comics in Texas where they have B&M stores. Out of the 40+ set of issues, only one comic was out of stock which was promptly refunded to my payment account.
Shipping was pretty fast, with just under 7 business days from payment to receipt of comics via USPS Media Mail. All comics were bounds pretty tightly in cardboard and taped and boxed. Condition of the comics were near as stated.
The only issue I have is that apart from two comics being bagged and boarded, the remaining batch of comics were not. I don't know if this is to cut cost on shipping weight or space, but I find it pretty hokey for a comic shop to ship comics unbagged and boarded.
Regarding shipping, while I did receive a notice that my order was shipped I did not receive delivery tracking information via an email or elsewhere on my online account.
OVERALL
While the lack of shipment tracking and lack of bags/boards, the fast delivery and only one missing comic makes this a worthwhile try. Sign-up for their newsletter and receive member-only coupon codes.
Rating: 3.5 out of 4 Monster Stars
Posted by Monster of the Week.com at 6:19 PM No comments: