FOR IMMEDIATE RELEASE:
ANNOUNCING THE CONCEPT ART AWARDS
A New Award Celebrating the Role of Concept Artists in the Entertainment Industry Will Be Presented this September at LightBox Expo in Pasadena 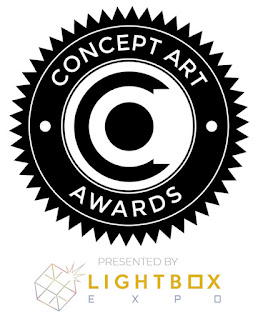 (LOS ANGELES, CA – June 3, 2019) From Ralph McQuarrie and the original Star Wars trilogy to H. R. Giger and Alien, from Mary Blair and Alice in Wonderland to Eyvind Earle and Sleeping Beauty, concept art and concept artists are a defining part of the modern entertainment experience. Beginning this September, a new industry award will celebrate their role throughout the world of movies, television, video games and more. On September 7th, the Concept Art Association will host its first annual award show: The Concept Art Awards, presented by LightBox Expo, in Pasadena, CA.
In recent years, with the increased use of CGI in live action and animation, the ability to create highly rendered finished pieces of art quickly have made concept art and artists valuable assets, yet this large group of unsung heroes are rarely recognized. During the event, artists will be honored for their artistic excellence in Live Action for film and broadcast, Animation for film and broadcast, Games (both mobile and PC/console), Original Concepts/Independent, Student Work, and Fan Art, along with a Lifetime Achievement Award and a LightBox Community Icon Award.
Entry to The Concept Art Awards is free with either a 3-Day or Saturday pass to LightBox Expo, a celebration of the visual arts in Pasadena, CA. LightBox Expo (or LBX) will be a multi-faceted experience for everyone from aspiring artists and students, to professionals and fans, with a focus on animation, illustration and concept art.
“The mission behind LightBox Expo is to shine a spotlight on the artists behind our favorite movies, animation, games and illustration, so it only makes sense to have an award show to recognize and celebrate the incredible talent in the entertainment industry,” said LightBox Expo Co-Founder Bobby Chiu. “The Concept Art Awards is going to be one of those events where we will only truly understand the importance of it in ten years, but the first one will always be the most special of them all.”
The Concept Art Association was created with the mission of elevating and raising the profile of concept artists, their art and their involvement in various entertainment industries. It was founded by concept artist and Head of Visual Development at Marvel Studios, Ryan Meinerding; Talent Manager Rachel Meinerding; and producer and co-founder of the BRIC Foundation, Nicole Hendrix.
“I really want to highlight this amazing group of talented individuals that I am honored to call peers, and what they bring to these industries,” said Ryan Meinerding. “I think this event is going to do just that. There has never been anything like it for concept artists before and I’m excited to say it’s finally happening, not just for the artist community but for a wider audience as well.”
The 2019 Concept Art Awards Presented by LightBox Expo will be an artist-submitted awards process, with the artwork first going through a peer voting phase to determine the finalists, and then onto a juried judging process where a winner will be selected. Judges include Marvel Studios’ Ryan Meinerding, Gnomon + Gnomon Workshop Founder Alex Alvarez, Weta Workshop’s Krystal Sae Eua, Ubisoft's Donglu Yu and Vitaly Bulgarov, with more exciting judges to be announced soon.
Submissions open June 3rd and close July 8th via https://www.conceptartassociation.com/. There is no fee for submissions, and finalists will be given free admission to the awards.
Learn more about the Concept Art Association and the 2019 Concept Art Awards Presented by LightBox Expo at: https://www.conceptartassociation.com/
LightBox Expo will feature the best artists in animation, illustration, live action and gaming industries under one roof for the ultimate celebration of art. The inaugural LightBox Expo event will be held from September 6-8, 2019 at the Pasadena Convention Center. Artists include Patrick O'Keefe (Art Director of Spider-Man: Into the Spider-Verse), Alvin Lee (Senior Artist on League of Legends), Kei Acedera (Tim Burton's Alice in Wonderland), Mike Mignola (creator of Hellboy), Chris Sanders (writer/director of How to Train Your Dragon), Jana Schirmer (Visual Development Artist at Marvel Studios) and hundreds more. Tickets are on sale now, and information about the event, including a full list of artists who are appearing, can be found at: https://www.lightboxexpo.com/
Posted by Monster of the Week.com at 5:00 AM